Information about Freneau Park as it now has its own web pages.

IN 1928, the OLSH Boys' College moved from Corinda to Whinstanes, near the Brisbane River in what is now Eagle Farm. 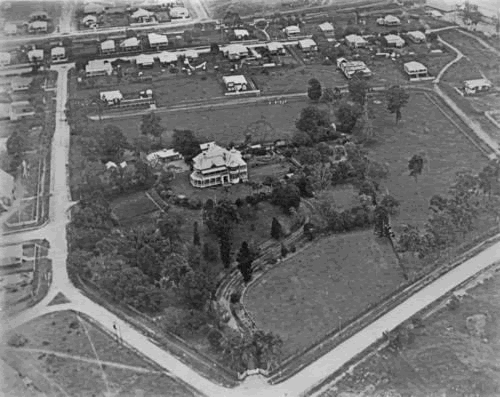 The suburb was close to major petrol storages and therefore declared a danger zone, and the sisters received orders from the military to relocate the boarding school.

The sisters and around 40 boys moved to The Range, and in May 1947, they moved to Freneau Park, named in honour of the order's Mother Superior, Florence Freneau. Army surplus buildings provided a dormitory, wash-house and classrooms and chapel, where mass was conducted by priests or brothers from St Patrick's Cathedral or Downlands College." 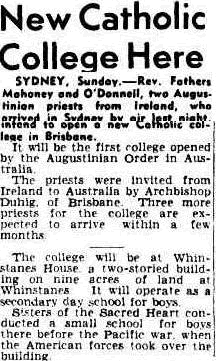 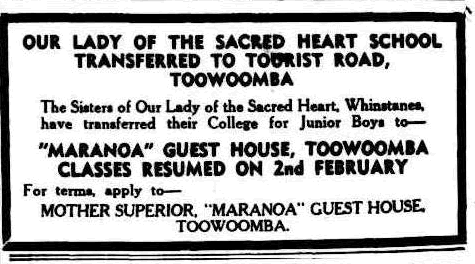 From a web site "Camp Whinstanes"

The US Army established Camp Whinstanes just off Eagle Farm Road (now Kingsford Smith Drive), Whinstanes (now Hamilton) in Brisbane, Queensland during WWII. It was located between College Street and Alison Street, Whinstanes. There may have been a Motor Pool located at the site as well.

Our Lady of the Sacred Heart College for Boys at Whinstanes was ordered closed due to its closeness to some petrol storage areas near the Brisbane River. The College was run by the Daughters of Our Lady of the Sacred Heart. The students were evacuated to two rented properties in Toowoomba. "Maranoa" a former guest house was used as accommodation and "Sonnenberg" a nearby house, was used as classrooms. In late 1942, the school was relocated to "Lyndon" which was a few blocks away. After the war the sisters stayed permanently in Toowoomba and the school at Whinstanes was sold to the Augustinian Fathers.

Camp Whinstanes was a US Military Stockade for US Military personel who were being punished. The MP's were housed at this complex as well as Wacol.

Maranoa Guest House, which is situated at the top of the Toll-bar at Toowoomba, and is well-known to visitors to the Downs capital, will again be available to guests from October 1. With its mountain scenery, and the accessibility of scores of beauty spots, combined with a glorious climate, Maranoa offers visitors a most enjoyable holiday.

To the Scotch the origin of this name needs little explaining, but to those who do not come from the land of "banks and braes" we must give a little explanation. A "whin" is a brambly bush that grows in Scotland, and there are many stanes (stones) about her ragged mountains. Com- bined, what a pretty home name the two words make! Some one from fair Scotia was only telling me the other day a little story connected with the whin bushes. It was that in her home a mattress was made from the pieces of wool gathered from these bushes that grew in a part where sheep were pastured. It was to this home that he had built and named, and from which the present suburb of Whinstanes takes its name-that the Scotchman, Mr. A. B. Webster, brought his wife and family when they left Kindar in 1881, and here they lived, until Mr. Webster's death in 1925. Then the house and grounds, consist- ing now of about nine acres, were sold to the Sisters of the Sacred Heart, who are conducting it as a boarding school for boys.

Whinstanes is a beautiful home, spacious, and commanding in appear- ance, and originally the land round it amounted to 15 acres. The road run- ning by one side of the property was eventually cut through some of the extra acres, and the Whinstanes rail- way station stands on another portion of them. The main Pinkenba-road, which runs past the front gate of the property, was in existence, I, under- stand, before Mr. Webster acquired his large acreage there, and built his home, I HAVE been told that there were several other homes similar to Mr. Webster's, erected by friends or acquaintances of his, in different suburbs, at about the same time. Look- ing away over some acres of flat land in front of Whinstanes, one gets a pleasing view of the river, and houses and hills beyond. The garden is charming, and there are many beau- tiful trees, shrubs, and palms growing in both it and the outer grounds; and there is a paddock where cows are pastured. And in the garden are fascinating arbours, and a delightful bushhouse, with a goldfish pond and fountain in its centre. A deep oval shaped stretch of lawn lies in front of the house, the main entrance to which is through a handsome porch way, supported by stone blocks. The house is of brick, with stone founda- tions, and corrugated iron roof. It is of two stories, with verandas and balconies on nearly all sides, divided by low windows. The front door is massive and wide, and possesses at- tached to it what I have not seen in any other Brisbane house, if my memory is correct-a chain for putting up to prevent the door from being opened for more than a few inches. Whin- stances was, of course, much more iso- lated in the 'eighties than it is now, and blacks camped on the river land below the house, and although not actually wild, were, I think, a little source of alarm to Mrs. Webster.

The front hall is of fine proportions, lofty and wide, then through a high archway, still hung with the beautiful set of chenille curtains of the Webster's time, one comes to a spaci- ous vestibule, from which leads the handsome cedar staircase. Above the halfway landing is a beautiful lead- light window of painted glass, on which is represented the Websters' coat of arms, and motto,' "Vincit Veritas," and four figures represent- ing the seasons, each in a corner of the square window, in illustration of the motto's meaning. There are deadlight panels also at each side of the front door, on which are painted urns holding flowers, which give a very bright effect to that part of the hall. The landing on the second story is spacious, and a narrow corridor leads off it on the right. The sisters have glassed in the balconies, and these, with the main upstairs rooms, are now used as dormitories, and the large domed room seen at the right- hand end of the veranda in the photograph, originally the billiard room, is the boys' refectory. The lower bow window in front of the house is that of what was the library, I think, and used by the Sisters now as a music room. Behind this is the dining-room, now the Sisters' reception room-a beautiful room, with several sets of sash windows leading on to the side veranda, and reaching from the floor almost to the ceiling. They are top- ped by a moulding of some varnished wood, from behind which hung hand- some curtains in the Websters' time. Beyond this room is a species of pantry, from which runs the hall to the kit- chen premises. A staircase from the end of this hall leads up to the maids' rooms, which are directly above it. Opposite the music room in the front of the house, is a beautiful bow-win- dowed room, with the same tall win- dows as those in the dining-room, and opening on to the front veranda. This was the drawing-room, but is now the Sisters' chapel. All the wood work in this beautiful home is of cedar, of course, and the mantelpieces are of wood-handsome pieces, most of these, carved, and otherwise ornamented, and that in the former drawing-room is inlaid also.

So Whinstanes, with its spacious and beautiful grounds, lent itself ad- mirably to the entertainments given there by Mr. and Mrs. A. B. Webster. Their mote distinguished guest of comparatively recent times, was H.R.H. the Prince of Wales, when he visited Queensland after the war. And now, Whinstanes makes a most delightful scholastic home, and the boys' time-there are several from distant lighthouses-is made more pleasant through the sporting type of Sisters who instruct them. This they do in their games as well as their studies. So, as we are told that "For the structure that we raise Time is with materials filled; Our to-days and yesterdays Are the blocks with which we build "- some worth-while "structures" should be the result of the training the boys receive at Whinstanes."