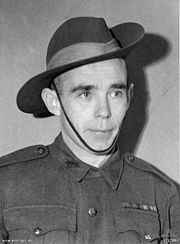 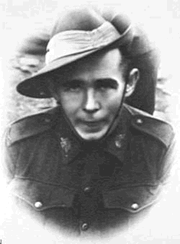 Fifth member of the AIF in this war to be awarded the Victoria Cross.

GEN. MACARTHUR'S HQ, January 2,---Pte, Richard Kelliher, 30, fifth member of the AIF in this war to be awarded the Victoria Cross, is a native of Ireland, but he has no dreams of going back there to live.

"I don't know what I am going to do after the war," Kelliher said when interviewed in an Australian general hospital in New Guinea, where he is suffering from malaria. "I understand that VC winners are invested by the King in England. I would like to go there, and return for a while to my mother in Ireland, but I'm coming back to Australia to live."

Speaking with a rich Irish brogue, Kelliher told some of his experiences across the Owen Stanleys, and the one n particular which led to his winning the VC. In the drive to Sandananda his unit was attacking a Japanese strongpoint, and the enemy fire was intense. Kelliher returned from the firing line with some information, but for a while there was some misunderstanding of his motive. Although he was soon fully reinstated in his battalion's good regard, the desire to prove that he did not lack courage was ever present in his mind.

Kelliher proved that conclusively at Heath's Plantation on the march to Lea in September. Describing the fight, Kelliher said: -

"A party of Japanese marines occupied a small ridge in the plantation, and were able to overlook our position along a track. The opposition was pretty stiff, because it was apparently a Japanese HQ, and we were held up. 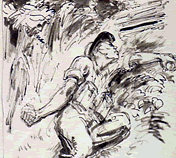 This image is in the Australian War Museum in Canberra

"When we cut a telephone line leading from the HQ the Japs became a bit demoralised. Our section leader, Cpl. Billy Richards (since awarded the Military Medal for his part in the attack) wend down with a bullet through his shoulder and appeared to be losing a fair amount of blood. Another man was shot through the ankle, and a third in our section was also wounded. All were out in no man's land.

"I wanted to bring Billy back, because he was my cobber, so I jumped from the stump where I was sheltering and threw a few grenades over into the position where the Japs were dug-in. I did not kill them all, so I went back, got a Bren gun, and emptied the magazine into the post. That settled the Japs.

"Another position opened up when I went on to get Billy, but we got a bit of covering fire, and I brought him back to our lines. I also helped the section bring in the other two.

"I didn't think of doing it to get a medal. My primary purpose was to bring Billy back, and that was the only way to do it."

Kelliher enlisted on February 2, 1940. Most of his time in Australia has been spent in Queensland, where he has worked on banana plantations, share farming, and house painting. He went to the Middle East as an infantry reinforcement, but was not in action. He transferred to his present battalion when a call went out for volunteers to join the unit, and he returned to Australia with them. 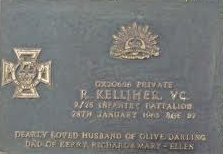 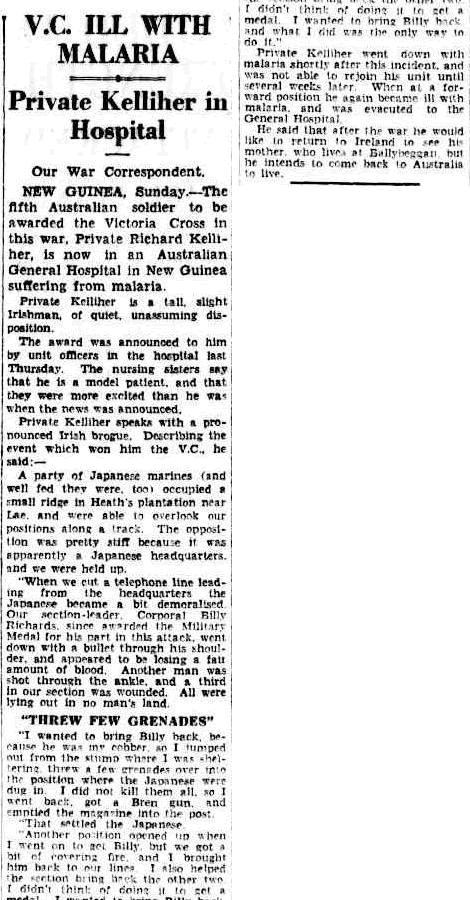 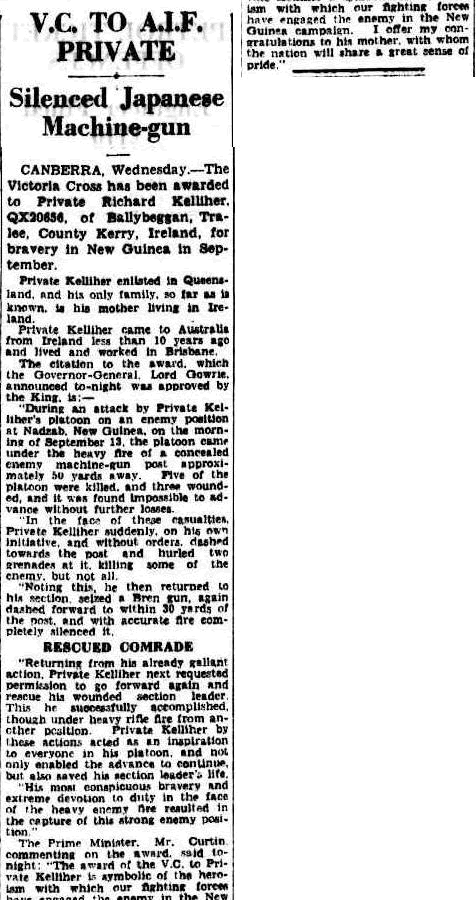 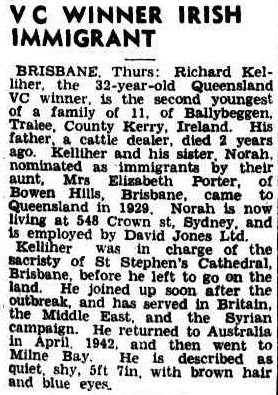 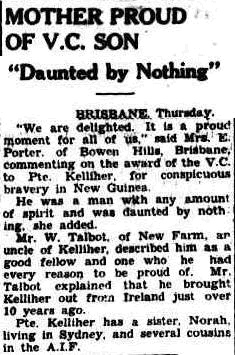 Australian recipient of the Victoria Cross, the highest and most prestigious award for gallantry in the face of the enemy, that can be awarded to British and Commonwealth forces.

Biographies, with references to William Henry Richards, and Richard Kelliher are available on the following web sites: - 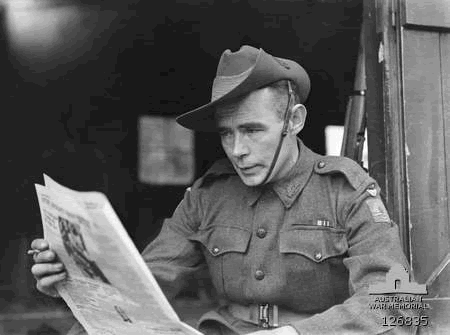 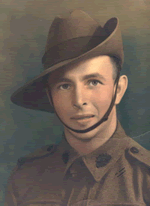