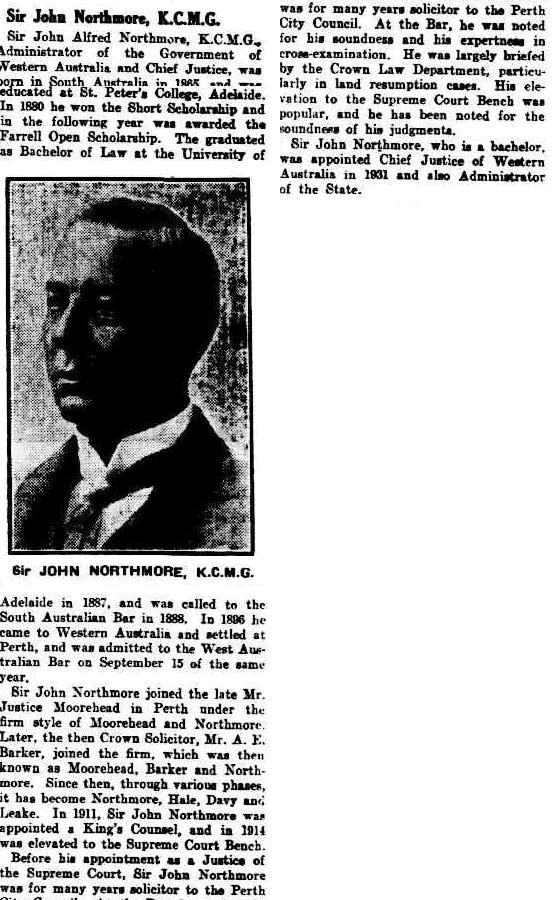 NORTHMORE, Sir JOHN ALFRED (1865-1958), chief justice, was born on 14 September 1865 in Adelaide, one of five children of John Alfred Northmore, a prosperous draper and later a sharebroker, and his wife Susan, née Churchill. They were Quakers from the west of England. Northmore attended the Collegiate School of St Peter and the University of Adelaide (LL.B., 1887). Called to the South Australian Bar in 1888, he practised at Port Pirie.

He moved to Perth and was admitted to the Western Australian Bar in 1896. After partnership with Frederick Moorhead, he headed the legal firm Northmore, Lukin & Hale, later Northmore, Hale, Davy & Leake. A King's Counsel from 1911, Northmore was elevated to the Supreme Court bench in 1914 and became chief justice in September 1931. However, after Sir William Campion's departure in June 1931, Northmore had stepped in to serve as administrator, and later as administrator and lieutenant-governor. He resigned in July 1933 because of the illness of his senior puisne judge, Thomas Draper. Northmore was appointed K.C.M.G. in 1938. He had carried out an important royal commission into the State Implement Works in 1915 and presided over commissions into electoral boundaries in 1929 and 1937. By the time he retired as chief justice in 1945 he was regarded as a genial 'national institution', but in 1947 he had to petition the government formally for the pension to which he was entitled.

As a solicitor, Northmore had been an authority on municipal law. He was long retained by the Perth City Council, which he represented as successful respondent in 1911 before the Privy Council, London, in an appeal lodged by the Perth Gas Co. On his own account, he took action in 1914 against the Avon Roads Board on a point of law requiring interpretation under the Justices Act (1902). Northmore was often briefed by the Crown Law Department, particularly on land resumption cases. As a barrister he filled his opponents with dread; and while learned counsel thought him intemperate or irascible on the Bench, it was acknowledged that his judgments stood firm and were seldom disturbed on appeal. His most notable quality was an ability to eliminate the inessential.

As pro-chancellor (1929-30) and senator (1930-36) of the University of Western Australia, and chairman of its finance committee, Northmore was vigilant over H. E. Whitfeld's and R. E. Parker's unorthodox accounting methods. The chief justice regularly spent his Saturday mornings examining the university's accounts. In 1931 he moved unsuccessfully for the imposition of fees at the university; and his contributions on senate were unimaginative. He was a foundation member of the law faculty.

Northmore was tall, with a distinguished and athletic appearance; his recreations were golf, yachting, fishing and shooting. He was a member of the Weld and Royal Perth Yacht clubs. He had a keen eye for investment and was part-owner of Swan Valley vineyards. Seemingly a confirmed bachelor, Northmore married a widow Emily Agnes Ventris, née Culmer, on 6 March 1941, in the Anglican Archbishop Le Fanu's private chapel. Predeceased by his wife (d.1957), he died on 15 May 1958 and was buried in Karrakatta cemetery. His estate was sworn for probate in four States at over £50,000.

Sir John Alfred Northmore, K.C.M.G, Administrator of the Government of Western Australia and Chief Justice, was born in South Australia in 1865 and was educated at St. Peter's College, Adelaide. In 1880 he won the Short Scholarship and in the following year was awarded the Farrell Open Scholarship. The graduated as Bachelor of Law at the University of Adelaide in 1887, and was called to the South Australian Bar in 1888. In 1896 he came to Western Australia and settled at Perth, and was admitted to the West Australian Bar on September 15 of the same year. Sir John Northmore joined the late Mr. Justice Moorehead in Perth under the firm style of Moorehead and Northmore. Later, the then Crown Solicitor, Mr. A. E. Barker, joined the firm, which was then known as Moorehead, Barker and Northmore. Since then, through -various phases, it has become Northmore, Hale, Davy and Leake. In 1911, Sir John Northmore was appointed a King's Counsel, and in 1914 was elevated to the Supreme Court Bench. Before his appointment as a Justice of the Supreme Court, Sir John Northmore was for many years solicitor to the Perth City Council. At the Bar, he was noted for his soundness and his expertise in cross-examination. He was largely briefed by the Crown Law Department, particularly in land resumption cases. His elevation to the Supreme Court Bench was popular, and he has been noted for the soundness of his judgments. Sir John Northmore, who is a bachelor, was appointed Chief Justice of Western Australia in 1931 and also Administrator of the State. 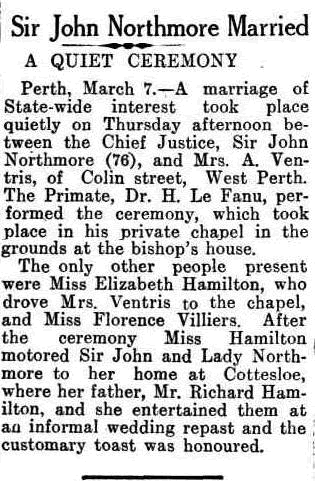 Perth, March 7.— A marriage of State-wide interest took place quietly on Thursday afternoon be tween the Chief Justice, Sir John Northmore (76), and Mrs. A. Ventris, of Colin street, West Perth. The Primate, Dr. H. Le Fanu, performed the ceremony, which took place in his private chapel in the grounds at the bishop's house. The only other people present were Miss Elizabeth Hamilton, who drove Mrs. Ventris to the chapel, and Miss Florence Yilliers.

After the ceremony Miss Hamilton ( motored Sir John and Lady Northmore to her home at Cottesloe, where her father, Mr. Richard Hamilton, and she entertained them at an informal wedding repast and the customary toast was honoured.