Pop's sister was known to me as Auntie Maude Fulton. Although Maude married twice there were no children from either marriage.

In 1926 Maude and Alex were living at Southport when her Mother Zara died.

When Pop Richards's father John Prideaux Richards died in 1942 he was living with Maude at Alderley. Maude's husband Alex had died in 1939. 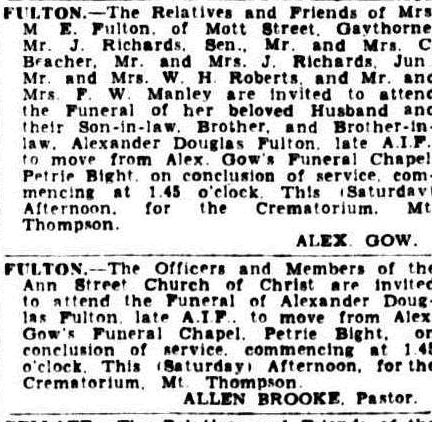 Maude was 60 years of age when there was an accident about June 1949 (Brian was 11 months old) with a car driven by my father William Henry Richards was hit by another vehicle. The newspaper report is attached.

A steel hood, recently installed by the owner, probably saved the lives of some of the seven people who were in a car which overturned in Sandgate Road, Boondall, at 5.10 p.m. yesterday. After being struck by another car, the car crashed on to its side, spun on the steel hood, and then crashed on to its other side. A man, three women, and three young children were in the car. The adults gathered the children, and crawled from the car uninjured, except for minor bruises and scratches.

The occupants were Mr. W. H. Richards, the driver, his wife, Jean, 35, and their three children, Peter two, Alwyn three, and Brian 11 months, all of Northgate, Miss Nora McGovern, 39, single, of Sapsford Street, Northgate, and Mrs. Maud Fulton, 60, of Carl Street, Thompson Estate. All were treated by Sandgate ambulance bearers and allowed go to their homes.

At one time Maude stayed with us briefly at 30 Donkin Street, Scarborough and I remember the long hair that she had and was amazed, as a child, the way she platted it every day.

I also remember, as a child, visiting Maude's house (It may have been her sister Zarah Lillian's house) at an address in Brisbane near a tram terminus. I thought is may have been at Annerley. She had boxes of seashells under the house which she had acquired in New Guinea where she had lived about 1920. Maude gave us a Tiger Cowrie shell and this shell remained in the family for a number of years. At the time of the visit, which may have been around 1956 or 1957 (I would have been 9 or 10), she was corresponding with a man in New Zealand who she was to marry. I remember that she said that he wrote to her everyday.

My research further shows that Maude went to NSW in 1957/58 where the Roll indicated that she registered in the Mackellar Electorate.

The NSW Mackellar Electorate shows that in 1960 there was a Maude Ethel Jones living at 58 Crown Road Queenscliffe together with a Thomas Jeremiah Jones and that he was a Foreman Presser.

Maude Ethel Jones died in the Manly district on 4 December 1964 aged 73 and the registration was Number 37177/1964 and her father was recorded as John Prideaux (Richards) and her mother was shown as Tara (should be Zarah).

After the death of Maude, Tom may have gone to live with a relative (sister) in Harbord NSW. I have not found Tom's death to 1975 where the records finish for the moment.

In 1970 when Rhonda and I were living at Bondi, Mum and Dad returned from a cruise to Japan and stayed with us for a few days. I recall taking them to visit Tom Jones and I thought it was in Soldiers Ave Harbord.

On the occasion of Pop's 58th birthday on 4th February 1954, Maude gave Pop Richards a book of the New Testament and Psalms. It was only a short time later that pop died on 11th March 1954. I now have that book.

Maude invited my brother Brian Ronald to visit one school holidays to their home at Queenscliffe near Manly in Sydney some time before her death in 1964. I thought I once saw a photo of her house which was taken from some distance and showed the hills of the Manly coast.