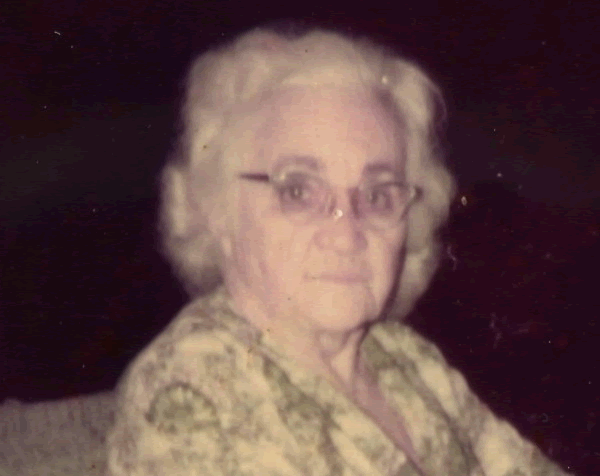 Jane Stokes was my Great Aunt.

Jane King was the second child of Ellen Jane King and she was born in Tent Hill Emmaville NSW on 21 August 1886. The fathers name is not stated on the Birth Certificate No. 20964/1886 but it was believed to be George Ford. George arrived from Scotland in Brisbane in 1878 and was in the Emmaville/Tent Hill area in 1884.

It is believed that Jane was in South Africa working as a Nurse during the Second Anglo Boer War and that is where she met her husband Thomas Dennison. It is understood that Thomas lost a leg during the fighting.

Thomas Dennison went to South Africa with the Sherwood Forester Regiment during the 2nd Anglo Boer War. The marriage was witnessed by R.K. de Boer and George Ford. It is assumed that George Ford was still working at the gold mine at Boksburg South Africa. There was a child George Frederick Dennison who was born 7 June 1906 but at some stage Jane disappeared and Thomas was unable to locate her. About 1908 Jane travelled to Derby with her son George and left him with Thomas's parents and sister. After hearing of the death of George Ford in 1915 Thomas claimed half of Jane's half share of his estate. However, according to the terms of the will of George Ford the estate was left to "her separate use independently of any husband".

Tommy, as he was known, remained in Pilgrims Rest and was somewhat of a notorious local identity.

It's an interesting story: "On 7 June 1912, at dusk, the mail coach between Lydenburg and Pilgrim's Rest was stopped here by a highwayman and robbed of £129 in silver coins. The brigand was later identified as Thomas Dennison of Pilgrim's Rest and, after having been found guilty, sentenced to five years' imprisonment. It was the last mail coach robbery in South Africa."
There was an earlier robbery on this pass, too. In 1899 another coach was ambushed and robbed of gold worth £10 000. A fitting name, then.

In 1912 the 2nd Zeederberg Coach robbery took place on Pilgrims Hill. The Highwayman was Tommy Dennison.

Dennison had come out to South Africa as a private during the Anglo Boer War*. He was a bugler and despatch rider for the Earl of Athlone and was discharged after being wounded on active duty. **
He somehow found his way to Pilgrims Rest and started work as a barber. A more efficient barber put him out of business so he employed some black women and started a laundry service.
It was during this time that he thought up the idea of robbing the coach obviously inspired by the success of the 1st robbery. Mr.A.P. Cartwright in his book Valley of Gold mentions that he actually met Tommy Dennison, who quite willingly spoke of his escapade.

On that fateful day the coach was stopped by a masked rider on the well recognised grey horse that Dennison had recently bought from the Reverend Maurice Ponsonby. When Piet du Plessis, the coach driver, was ordered in a fake accent to throw down the money boxes, one box fell and burst open scattering silver half crown and florins on the ground.

The highwayman was heard to yell "You fool I thought you said it was gold sovereigns". The coins were scooped up into a bag and the robber took off.

The next day during his laundry delivery Dennison started paying all his debts in silver coins, which aroused suspicion.

He was arrested and admitted his guilt saying that it was a practical joke, hoping for leniency.
The judge saw nothing funny about this and laid down a five year jail sentence in the Pretoria Central Prison.

After serving his term he returned to Pilgrims Rest and worked as a cartage contractor for the mines.

He one day decided to open a garage, his sense of humour came to the fore and when people saw his sign "The Highwayman" there was much laughter.

He mentions that Dennison referred to his days in prison as his college days. When offered a copy of this interesting book he asked the author to please sign it.

** Thought to have lost a leg 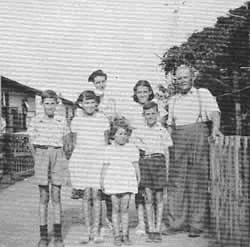 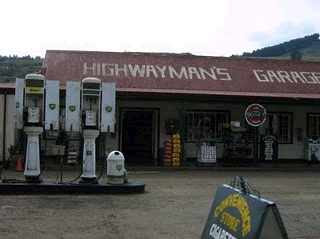 A sense of adventure grips you when you drive Robber's Pass. It's no wonder. This is where the old transport riders battled through to Delagoa Bay. It's Jock of the Bushveld country. And evidence of the gold diggers of long ago is still visible everywhere. The landscape is beautiful, especially after the summer rain and with something of the Kruger National Park's wildness that seems to affect the entire region. Drive slowly, because Robber's Pass deserves your undivided attention.

There are various theories about the origin of Pilgrim's Rest's name. The one is that a digger exclaimed, "Now, at last, the pilgrim is at rest," after striking gold. And the cliffs echoed back: "Pilgrim's… rest… rest".
Another is that a group of diggers from Pieter­maritzburg, among them Herbert Rhodes, brother of the im­perialist Cecil John Rhodes, named themselves The Pilgrims.
And a third is that newcomers were welcomed with the words: "Here comes another pilgrim to his rest."

The town has a rich history and is regarded as the birthplace of South Africa's gold industry.
The gold rush started in earnest when the area was declared a goldfield on 22  September 1873. For the first few years only alluvial gold was mined.


Underground mining started in 1881 when one David Benjamin obtained mining rights on a number of fields in the area. In 1895 the Transvaal Gold Mining Estates was established to formalise the industry.

Nothing is forever, and in 1972 the last gold was mined here and the shafts were closed.

In the Royal Hotel's dining room you can see a photograph of the Perseverance Nugget on the wall, found on 16 December 1871 by George Russel. It tipped the scale at 119 ounces (a hefty 3,3 kg!), at the time the largest find of its kind in the country.

Also of interest is the robber's grave in the town's graveyard. The story goes that a thief, convicted for stealing a tent, was banished from the town and returned a few days later, only to be shot dead. To single him out, his grave was laid out in a north-south orientation instead of the traditional east-west. (But he's not the same robber after whom the pass was named.)
If you have time to spare, wander around the shops, pat Churchill the Labrador, and stop for a beer at the Royal Hotel - it's tradition when you visit the town.

The first coach robbery took place at the top of Pilgrim's Hill, now known as Robber's Pass, in 1899. Two masked highwaymen stopped the coach, threatened to shoot the driver and passengers, unhitched the mules and made their escape with gold to the value of 10 000 pounds. In 1912, the second coach robbery took place. Tommy Dennison, a well known character in Pilgrim's Rest, was badly in debt. His attempt at robbing the Mail Coach, a few metres from the spot where the first robbery took place, was however not so successful. Instead of gold sovereigns, Dennison found only a case of silver coins. He was arrested while trying to pay his debts with the stolen money. After a five year jail term, Tommy returned to Pilgrim's Rest where he opened The Highwayman's Garage.

A 3 page letter regarding Tommy Dennison aka "The Highwayman" - an Irishman who came to Pilgrim's Rest and robbed the wagon bringing the bullion from Lydenburg to Pretoria. On opening the boxes he discovered they were filled with half crowns and he was so disgusted that he went into town (PR) and bought drinks for everyone. He was promptly arrested and sent to jail for 5 years in Pretoria. He returned to Pilgrim's Rest and did many things - entertainer, bar tender, train driver etc. Quite a colourful character.

If anyone has any further information on Tommy Dennison, or his descendants, please email Peter Richards

When Jeanetta Ford was 25 she married Thomas Henry HARLL (or Harle) aged 26 on 11 August 1912 in West Hartlepool in Durhamshire in the North East of England. (Not that far from Berwickshire Scotland). Jeanetta stated on the Marriage Certificate that her father George Ford was deceased but he did not die until 1915. A daughter Dulcie Jean Harle was born 18 February 1919 "Warrawa" Lismore NSW and the father was Thomas Henry Harle 32 a "motor driver" and the mother Jane Ford 32 born Tent Hill New England NSW. The was no other children living but one male deceased.

Jane married Sidney Fredrick Stokes on 30th June 1928. I do not believe there were any children from this marriage.

Cecilia Trembath divorced Joseph Saunders Trembath about 1921 and left Joseph and her children. Jane Ford helped bring up the Trembath children at one time.

Jane had a child to Joseph S Trembath and Peggy Saunders Trembath-Harll was born at "Sandown" Southport on May 24 1922. The father was described as Joseph S.T. Harll of 'The Rectory, Southport' and married on 18th August 1911 at Pilgrims Rest, Africa. (This time Harle was spelt with two l's on the Birth Certificate). (The actual date of Joseph's marriage to Jane's sister Cecilia was 23 April 1911).

On December 15 1944 during WWII Peggy married an American M.P. based at Wacol known as Walter Theadore Duensing. Wally was born December 17 1921 Holbrook Nebraska USA and he was one of five children of Louis and Frieda Duensing.

Wally and Peggy remained in Australia although they did visit USA at one time.

Wally and Peggy had five children and they are: -

Peggy Saunders Trembath Duensing died on 25 February 1985 and Walter Theadore Duensing on 19 July 1997 and both are buried at Pinnaroo Cemetery Portion 10B Grave No. 345. 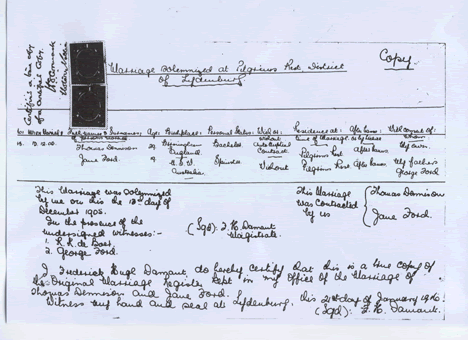 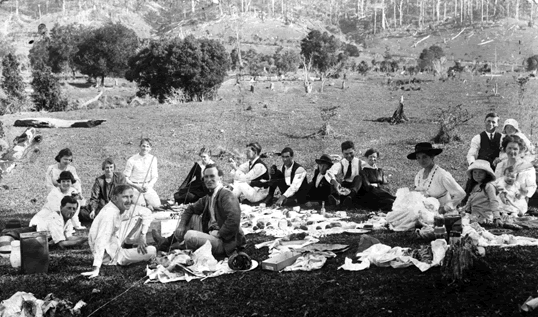 On the Ford Farm Pigabeen 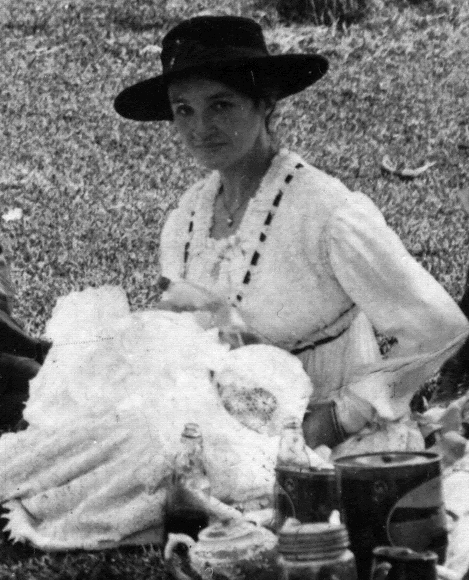 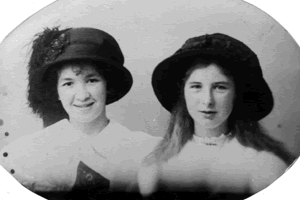 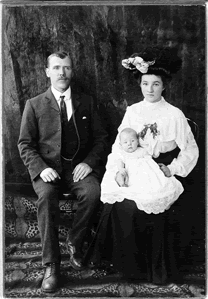