Henry Gralton, who was known as Harry, was born about 1828 in the Parish of Creeve, County Roscommon Ireland and Harry was a Shoemaker.

Little is known about his early life but Henry married Margaret Dobbins from Limerick, Ireland on November 30, 1850 in St Giles in the Fields, Saint George, Bloomsbury, London.

Henry was a Shoemaker aged 22 and Margaret aged 18. The couple were married in the Sardinian Chapel of St Giles Roman Catholic Church. Both Henry and Margaret signed with an X. The residence of both was shown as 27 Eagle Street, Bloomsbury and that street exists today. 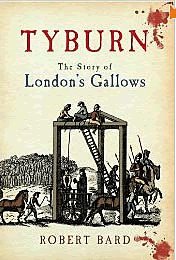 The Story of London Gallows

The Churchwardens of St Giles would buy condemned prisoners, on their way to Tyburn Gallows, a last drink of ale at the Pub next door known as 'The Angel in the Field' . One prisoner who refused the offer for a last drink missed the pardon that was waiting there for him. Origin of the saying "On the Wagon" - meaning a person has stopped drinking alcohol! 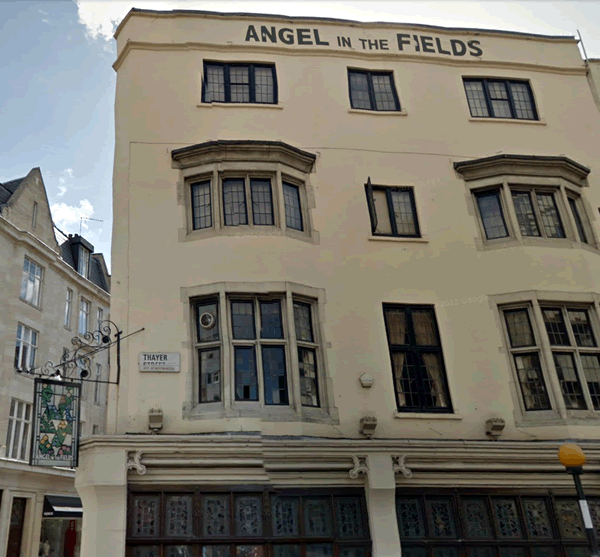 Prisoners were transported to Tyburn Gallows on a wagon and were allowed one last drink in a pub on the way to their execution. If offered a second drink by a sympathiser the guard would reply, "No, they're going on the Wagon!"

In the British Census held on 30th March 1851 Henry and Margaret had been married for exactly four months and were living in London under the name of Grant which was the name they used when they married. The Census records state that they lived in the Township of Bloomsbury in the Borough of Finsbury. In the Census record it also shows in the same street Margaret's father John Dobbins (a Tailor) and his wife "E", both 60 years and both from Ireland together with son in law Michael Chard?, 12 and daughter in law Jenny? 3, from Neidt?. It would be assumed that Michael was the child of one of John Dobbins other daughters. The records state that Margaret's parents were John Dobbins and Mary. There is a record of a marriage of a John Dobbins in the same quarter as Henry and Margaret (i.e. December 1850) so it is possible that he remarried and it may have been on the same day as his daughter's wedding.

Their children of Henry and Margaret were: - 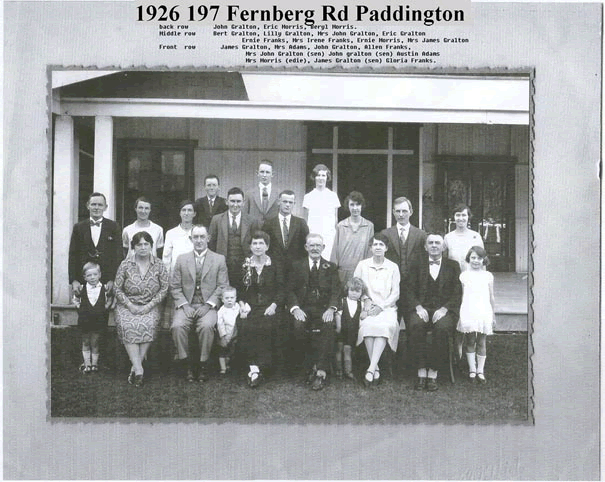 The following Gralton's are buried in the Nudgee Catholic Cemetery in Brisbane.


There are other Gralton's who are buried at Nudgee under their married names. These include: -

Winifred Mary Gralton is the daughter of Henry and Margaret Gralton. 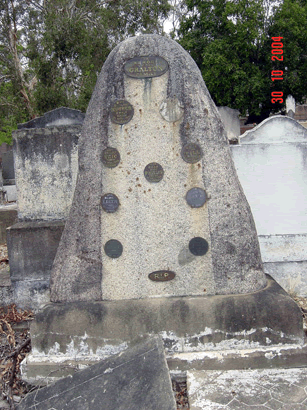 The children of Henry and Margaret Gralton: - 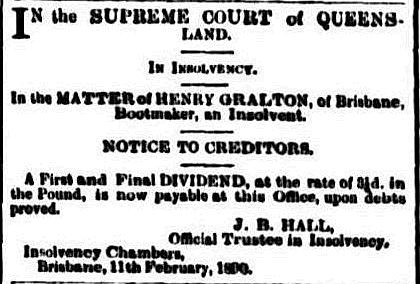 In the matter of Henry Gralton, of Brisbane, bootmaker, insolvent, Mr. Robinson (Messrs. Powers and Robinson) applied for a certificate of discharge under section 169 of the Insolvency Act.

One Pound reward. -- Lost, from South Brisbane, Gray Horse, fleabitten, branded DW on near shoulder. The above reward will be paid on delivery to H. Gralton, 88 Queen street. 5752