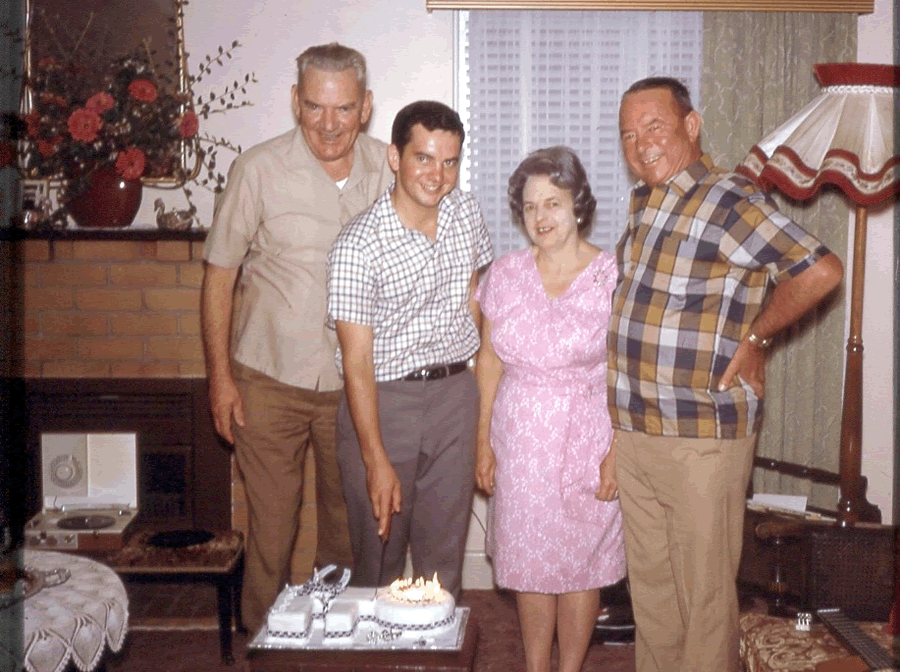 Francis Patrick Malone was a Public Accountant in Fortitude Valley, Brisbane. Frank was the fourth and one of at least eight children of Edward Malone and Judith Harten. Edward and Judith married in 1898 in Queensland. Edward was Station Master at Nambour and Bald Hills.

Frank, together with Clem Jones, were members of the Australian Cricket Board of Control and Frank was Treasurer of the Queensland Cricket Association (from 1945). 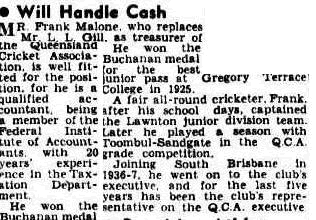 MR. Frank Malone, who replaces Mr. L. L. Gill, as treasurer of the Queensland Cricket Association, is well fitted for the position, for he is a qualified accountant, being a member of the Federal Institute of Accountants, with 20 years' experience in the Taxation Department. He won the Buchanan medal for the best

junior pass at Gregory Terrace College in 1925. A fair all-round cricketer, Frank, after his school days, captained the Lawnton Junior division team. Later he played a season with Toombul-Sandgate in the Q.C.A. grade competition. Joining South Brisbane in 1936-7, he went on to the club's executive, and for the last five years has been the club's representative on the Q.C.A. executive. 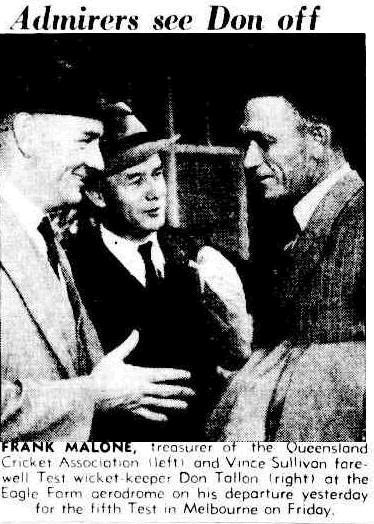 FRANK MALONE, treasurer of the Queensland Cricket Association (left) and Vince Sullivan farewell Test wicket-keeper Don Tallon (right) at the Eagle Farm aerodrome on his departure yesterday for the fifth Test in Melbourne on Friday. 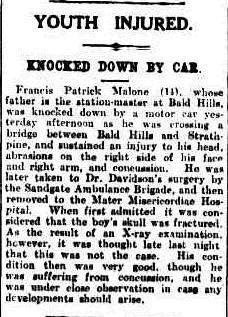 KNOCKED DOWN BY CAR.

Francis Patrick Malone (14) whose father is the station master at Bald Hills was knocked down by a motor car yesterday afternoon as he was is crossing a bridge between Bald Hills and Southpine and sustained an injury to his head abrasions on the right side of his face and right arm, and concussion He was later taken to Dr Davidsons surgery by the Sandgate Ambulance Brigade and then removed to the Mater Misericordia Hospital When first admitted it was considered that the boys skull was fractured. As the result of an x-ray examination however, it was thought late last night that this was not the case. His condition then was very good though he was suffering from concussion, and he was under close observation in case any developments should arise. 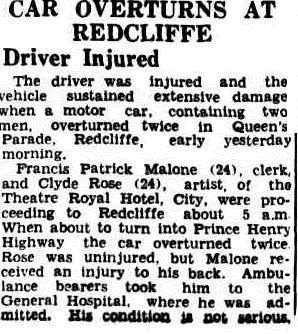 Francis Patrick Malone (24), clerk, and Clyde Rose (24), artist, of the Theatre Royal Hotel, City, were proceeding to Redcliffe about 5 a.m. When about to turn into Prince Henry Highway the car overturned twice. Rose was uninjured, but Malone received an Injury to his back. Ambulance bearers took him to the General Hospital, where he was admitted, His condition is not serious.

They are burried together in Pinnaroo Lawn Cemetary - Bridgeman Downs (8A-799). 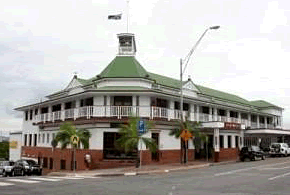 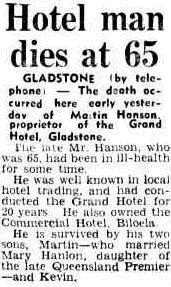 The Grand a Tall Story

Martin Hanson Snr, was one of the first people in town to own a small truck in the 1940's.

As publican of the Grand Hotel (1929 - 1953), Martin would supply and deliver the orders for alcohol for South End.

Bill Hodges would transport the supplies over to the island aboard his boat: 'Lyola'.

Martin would load up reverse out of the Grand and coast down the hill towards the wharf where the boat was waiting. The truck didn't have any brakes, so Martin would have to change gears to slow the truck down before getting to the boat.

On one occasion, the truck did not slow and Martin lost control, bouncing the truck over the lip of the wharf and nearly into the water.
The truck was suspended half on the wharf and half off, with a white faced Martin Hanson still in the driver's seat.

Luckily the incident happened close to the wharf crane and the men present were able to attach the front of the truck to the crane and lift it back onto the wharf. 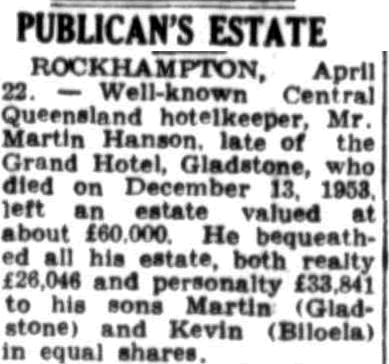 He bequeathed all his estate, both realty £26,046 and personalty £33,841 to his sons Martin (Gladstone) and Kevin (Biloela) in equal shares. 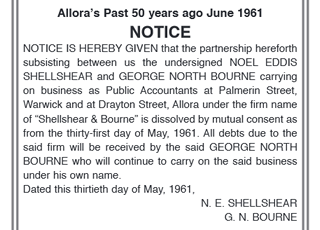 NOTICE IS HEREBY GIVEN that the partnership hereforth subsisting between us the undersigned NOEL EDDIS SHELLSHEAR and GEORGE NORTH BOURNE carrying on business as Public Accountants at Palmerin Street, Warwick and at Drayton Street, Allora under the firm name of “Shellshear & Bourne” is dissolved by mutual consent as from the thirty-first day of May, 1961. All debts due to the said firm will be received by the said GEORGE NORTH BOURNE who will continue to carry on the said business under his own name. Dated this thirtieth day of May, 1961,