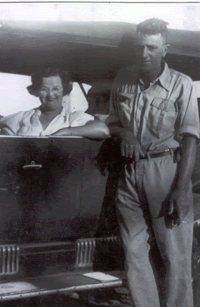 Eva Brady was born in Brisbane on 13 July 1895 to Charles Brady and Ellen Jane Ford (King).

Eva married Alfred CASTLE who she met at a dance hall and had seven children, six of whom were miscarried or stillborn. It has been said that Alfie was a drunk and used to hit and kick Eva in the stomach even when she was pregnant and I am sure this resulted in the miscarriages and stillbirths. The surviving child was called Alfred James Castle.

When Eva remarried it was to William Jack CARSON, who I met in my early years, but they had no children. I am told that Ellen Jane King lived in the same area and died in 1908. Bertha was the one who tried to nurse her back to health when she was dying, as she loved her so much. They first lived near the Redbrick Hotel in Annerley Road and later at Coorparoo. Donald Hanscomb later purchased the house that Jack Carson and Eva lived in at Cooparoo. Jack Carson lost all his possessions in the Brisbane Flood of 1974. Eva died first and they both Cremated at Mt.Thompson Crematorium. Jack worked for the removal firm Wridgeways and was a traveling salesman. He undertook a trip to Western Australia after Eva died. They wanted to be together. When Jack died his ashes were placed in the same row, but not together. Jack Carson's parents were both killed in an accident and Jack was adopted. Jack had one sister. Jack was born about 1901.

After Eva died Jack Carson lived for about ten years at Toombul Road with Zena and Wally Bradburne. Hazel was married by this time. As Zena's health was failing and Jack was getting on her nerves he moved to a boarding house where he later died. 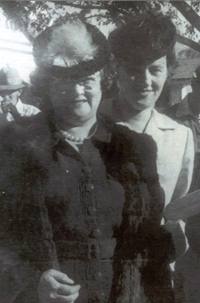