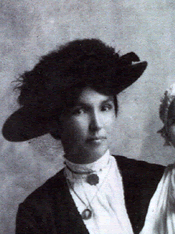 Bertha was my Great Aunt.

Bertha, as she was known, was born 28th January 1884 in the District of Armidale NSW. The name on the certificate is: -

Her birth was registered by her mother Ellen Jane King, 18 years, on 29th February 1884. The birth certificate No. 28543/1884 does not show the name of the father but does give Ellen's address as Vegetable Creek.

It is believed that Bertha was the first born to Ellen Jane King.

Marie older sister Bertha KING was born in 1884. When married on 9 October 1909 Bertha COATES lived at Heal Street, New Farm. I found her double plot grave well marked at the Balmoral cemetery on Wynnum Road and near Bennetts Road. It is near the Morningside Services Club. Alongside is buried her daughter Amy Toop and her husband Gordon. Hazel has given me an address where Bertha's daughter Ellen Thelma COATES used to live at 43 Junction Road Morningside. I have been to the house and found it up for sale. It is almost opposite the Colmslie Hotel. I returned to the house in November 2004 and spoke to the lady from the house next door to the left of Thelma's. She told me that Ellen Thelma HANSCOMB was in the Cleveland Manor Retirement Complex alive and well and her son Donald lived not too far away. I found an ET Hanscomb in the phone book and called her. It was Thelma 89 years young, fit and well but recovering from a minor operation. After introducing myself she remembered that my Dad, Bill Richards, had a son born just after WW2 and that his initials were WAR. I confirmed that she was correct. My brother William Alwyn Richards was born October 4, 1945. I told her that I had a photo of her and her sister and Mother taken about 1928 at Cribb Island and that my Dad was her brother Eddy's best man at his wedding. She asked if I could visit and I agreed to see her soon to give her time to find her book with names and dates that I needed for the Family History and to recover from the operation. Ellen Thelma Hanscomb said she remembered staying at the Gralton's for a week or two when she was young. I am not sure if was at Bridge Street Breakfast Creek or 225 Water Street, Fortitude Valley. Ellen confirmed that William Henry Gralton Senior was a Fruiterer.