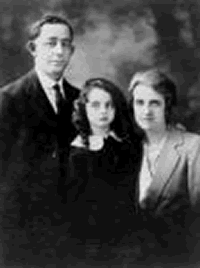 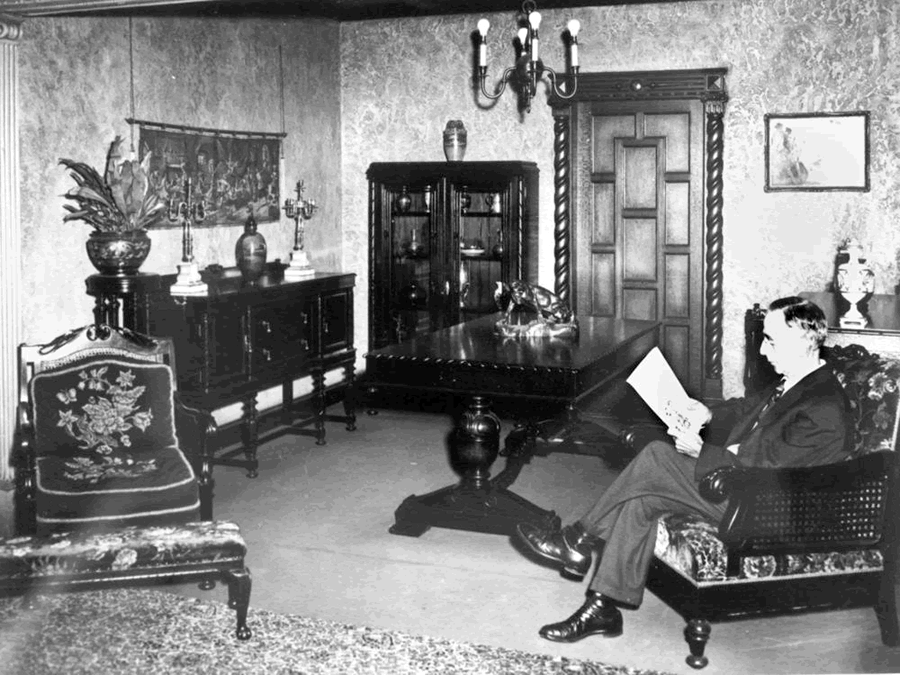 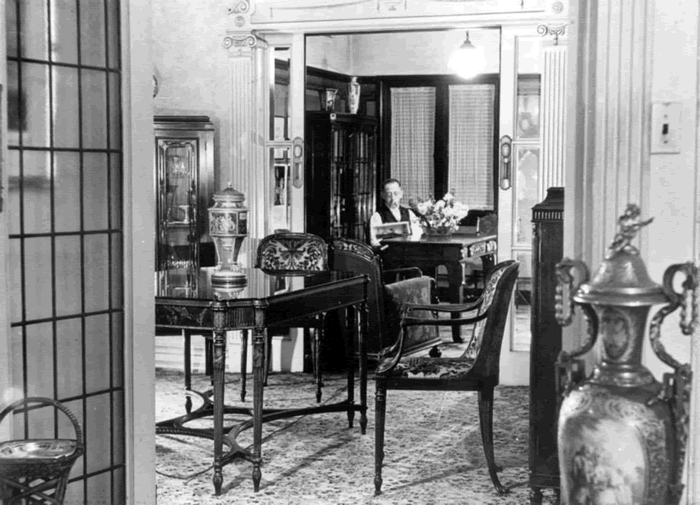 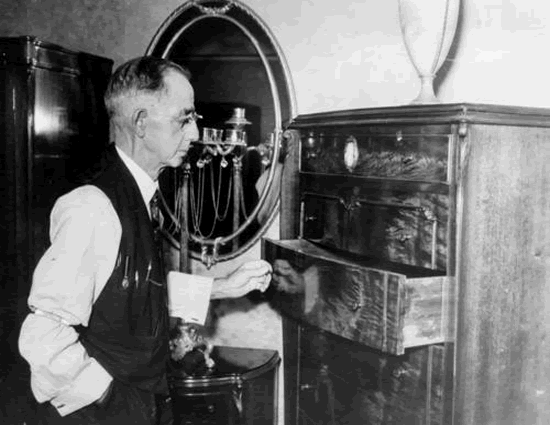 "Edmund Rosenstengel (1887-1962), furniture-maker, was born on 2 February 1887 at Toowoomba, Queensland, ninth of twelve children of Richard Rosenstengel, a Prussian-born cabinet-maker, and his wife Margaret, née Moynihan, who came from Ireland. Apprenticed in 1902 to his father at the Toowoomba firm, Rosenstengel & Kleimeyer, Ed moved to Sydney in 1906 and worked for a time with Edward Verdich, a craftsman at Newtown. He spent a year at Auckland, New Zealand, before travelling in 1908 to Vancouver, Canada, where he took a seasonal job with a timber company and ran a small furniture-repair shop during winter. After visiting Grand Rapids, Michigan, United States of America, a centre of furniture manufacture, he returned via Europe to Queensland and rejoined the family business in 1911. On 28 April 1914 at the Sacred Heart Church, Sandgate, Brisbane, he married with Catholic rites Eveleen Gertrude Smith; they were to have a son (d.1918) and a daughter. 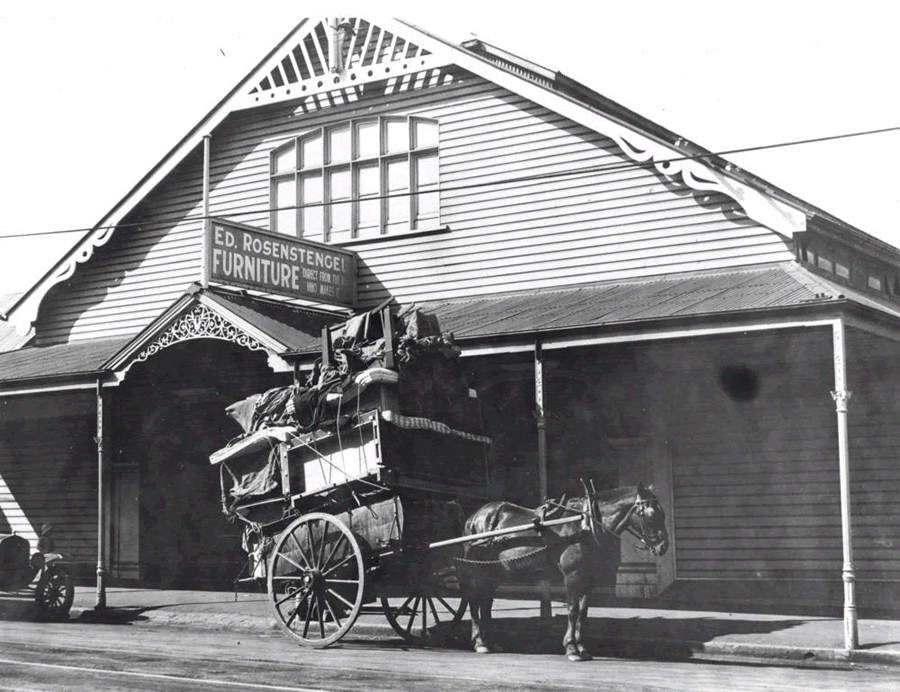 In 1922 Rosenstengel set up a workshop and showroom at New Farm, Brisbane, in a building that had previously been a picture-theatre. For the next few years he made austere oak furniture in the style of the Arts and Crafts movement, similar to items produced by local competitors. The slogan, 'buy furniture direct from the man who makes it', became a well-known feature of his promotions.

Rosenstengel's work gradually began to reflect his interest in the decorative arts and his admiration for Queensland woods, particularly oak, silver ash and maple. Believing that the 'best results' would come from the informed adaptation of historical styles, he often incorporated elements of different periods or blended aspects from French and English traditions. His best-selling items included black-stained oak dining-tables and sideboards in the Jacobean style, suited to 'Tudor residences' and 'Spanish mission villas' which were built in Brisbane in the late 1920s. Advertisements for his business indicated that he also tried to bring his sense of design and workmanship to the 'man in the street'. 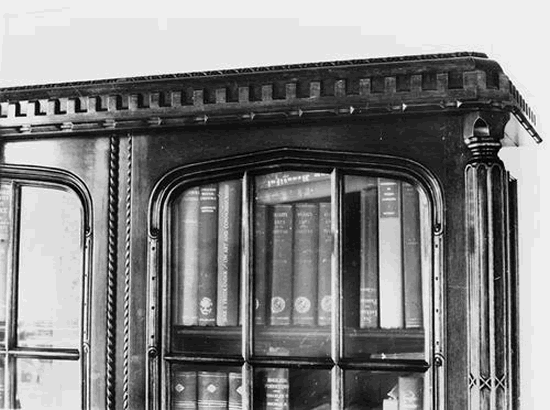 Ed Rosenstengel's Bookcase at his residence

Special commissions executed during the 1930s included a gramophone cabinet for the yacht Tangalooma, Louis XVI-style furnishings for the reception room at the Brisbane Hydropathic Baths and furniture for the lord mayor's office. He made a jewellery box of maple and satinwood, ordered by the Queensland government as a gift for the Duchess of York, and a suite of Louis XV-style furniture for the bedroom in Government House, occupied by the Duke of Gloucester during his visit to Brisbane in 1934. The pieces, made entirely of Queensland timber, comprised a bed, dressing-table and chairs of maple, and a standard lamp of silver ash decorated with Australian flora and fauna. 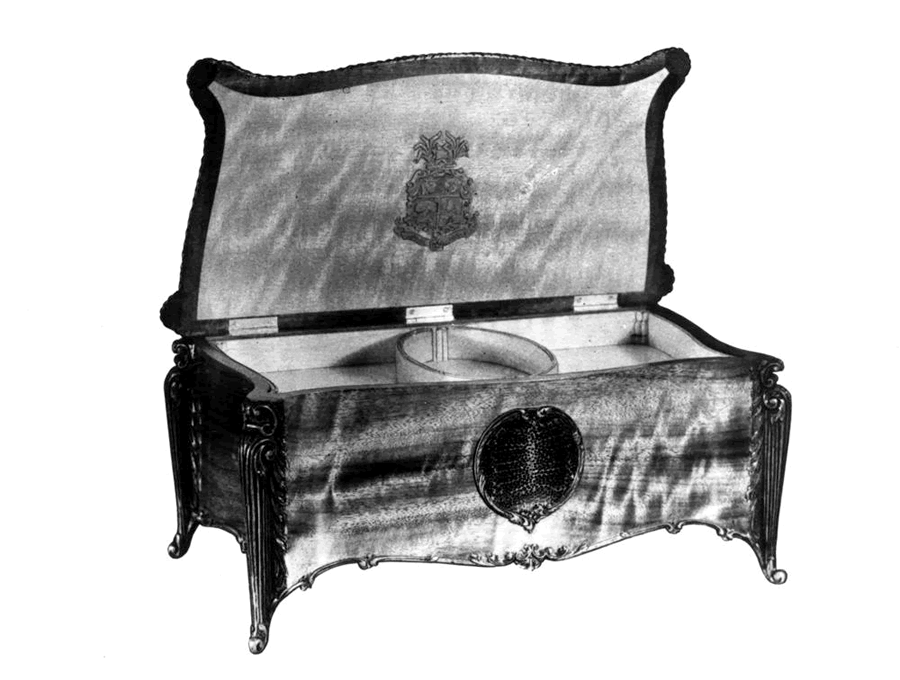 The Queensland Authors' and Artists' Association engaged Rosenstengel to carve a grand frame to accommodate the poem written by Mabel Forrest for the opening (1930) of Brisbane's City Hall. Unveiled in September 1937, it was one of his most important works. The frame was made from silver ash and depicted coastal vegetation. That year he completed a bardic chair, commissioned by the State government for presentation to the winning bard at the (Royal) National Eisteddfod of Wales. The most striking part of this high-backed chair in Gothic style was a panel of satin ash, carved in bas-relief and polychromed with Welsh scenery and traditional Welsh figures, which was surmounted by the Queensland coat of arms and a laurel wreath.

World War II dramatically changed the priorities of craftsman and customer, and reduced manpower and materials. The number of staff at Rosenstengel's workshop declined from about twenty-five to ten and he was required to make standard wartime repeats. In his frustration he wrote: 'I find the aesthetic and creative senses sluggish almost to a state of paralysis'. Despite the restrictions, he was able to produce a jewellery box in French Régence style for Colonel Walter Enz of the United States Army, and two armchairs in Queensland maple, presented (1946) by the Queensland division of the Australian Red Cross Society to the retiring governor Sir Leslie Wilson. 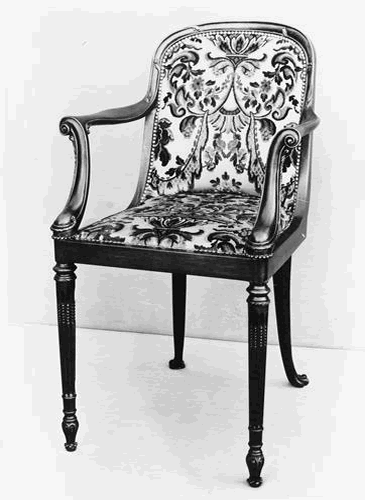 Rosenstengel's faithful clientele continued to order new furniture and to bring back old items for refurbishment. He announced his retirement in 1956, but requests from customers for 'last pieces' kept him in business until March 1958. A quiet and private man, he devoted his final years to studying reference books on eighteenth-century decorative arts from his large library. He died on 11 October 1962 at his New Farm home and was buried in Nudgee cemetery; his wife and daughter survived him. In 1972 his collection of furniture, silver and rare porcelain was sold at public auction." 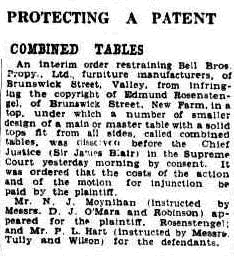 PROTECTING A PATENT
COMBINED TABLES
An Interim order restraining Bell Bros. Propy., Ltd., furniture manufacturers, of Brunswick Street, Valley, from Infringing the copyright of Edmund Rosenstengel, of Brunswick Street, New Farm, in a top, under which a number of smaller design or a main or master table with a solid tops fit from all sides, called combined tables, was dissolved before the Chief Justice (Sir James Blair) In the Supreme Court yesterday morning by consent. It was ordered that the costs of the action and of the motion for Injunction be paid by the plaintiff.
Mr. N. J. Moynihan (Instructed by Messrs. D. J, O'Mara and Robinson) appeared for the plaintiff, Rosenstengel; and Mr. P. L. Hart (Instructed by Messrs. Tully and Wilson) for the defendants.

Your Brisbane: Past and Present