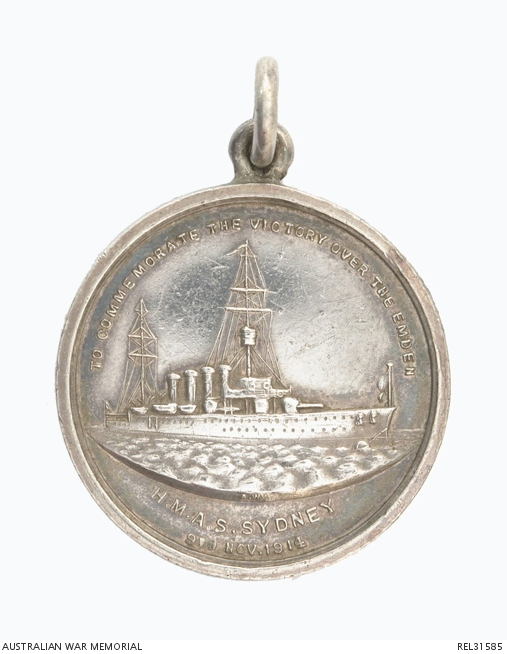 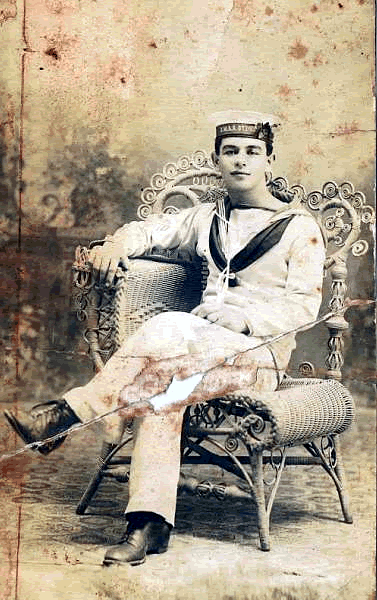 Some information about the Movie Sea Raider and Unsere Emden

"The NFSA is marking the centenary of Australia's first victory at sea, when the HMAS Sydney defeated the SMS Emden on 9 November 1914, with the publication of the 1931 silent film Sea Raider. The first film about this battle, Unsere Emden, was made in Germany in 1926. Legendary Australian director Ken G Hall bought it, and decided to shoot new scenes to cut into the existing footage, with cooperation from the Australian Navy. The new footage, with new titles, was cut into the German film to create The Exploits of the Emden. It opened in Sydney’s most prestigious cinema, the Prince Edward, on 21 September 1928. Sea Raider is a recut of The Exploits of the Emden, made three years later. For reasons that are still unclear, someone recut the film, deleting a subplot about a Reservist Officer and his sweetheart from Germany, and shortening the overall film by more than half. This film was called Sea Raider. Sea Raider has removed most of the scenes of character development from both Unsere Emden and The Exploits of the Endem, to provide a straightforward dramatised documentary that covers the career of SMS Emden and its conflict with HMAS Sydney. Intertitles describe the sequence of events. For more information about The Exploits of the Emden: http://aso.gov.au/titles/features/the..." 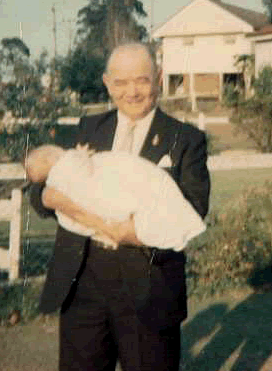 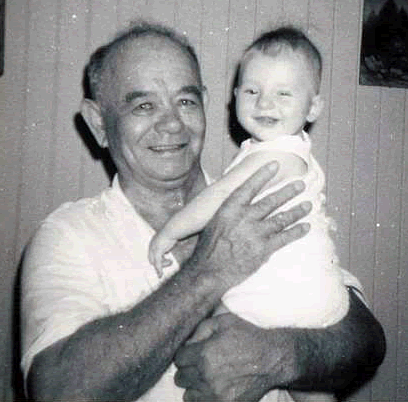 Eva's full brother Charles Henry BRADY was born on September 26, 1896. Charles joined the Navy in Sydney July 25, 1912 at the age of 15 and 9 months exactly. He signed up for 7 years. His service number was number 1869. On his service records he listed his half sister Marie Gralton of Bridge Street, BREAKFAST CREEK, as his next of kin.

Marie married William Henry Gralton April 24 1912. When young Charles joined the Navy he was 5 ft and three quarters of an inch high and later was recorded as being 5 ft 4 inches tall with dark hair brown eyes and a shallow completion. He had a scar under his chin on the left side.

During his service with the Navy Charles rose from a rating of 'Boy II' to 'Signaller'. He served on the Naval training ship H.M.A.S. TINGIARA and the Naval yacht H.M.A.S. FRANKLIN. The Tingiara was commissioned on April 25 1912 and was the first Naval training ship in the Royal Australian Navy. The first intake of boys who chose the Navy as a career under the Navy's boy enlistment scheme was between June 1 and June 28 1912. The Tingiara was originally the Clipper ship Sobraon and was purchased by the Commonwealth of Australia in 1910 and after an extensive refit at Cockatoo Docks she lay at her moorings off Rose Bay Sydney for the next 15 years. 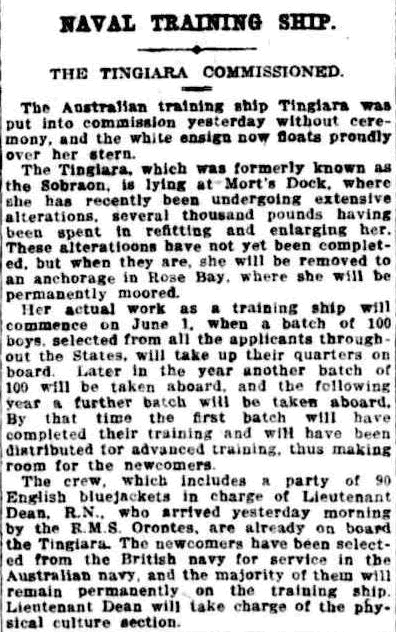 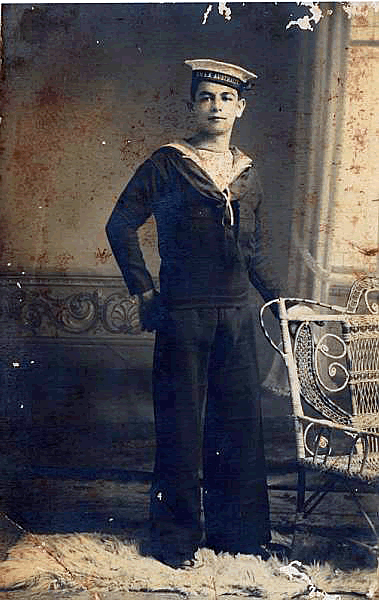 Charles Henry Brady's Victory Medal would have had his service number, initials and surname along with his rank stamped into the back. I understand these particular Victory Medals (with the Mexican Silver Dollar) are now valued at about $4,400.00.

According to the records of List of Officers and crew of HMAS Sydney, Australia’s First Naval Fight, November 1914, Charles Henry is listed as C.Brady, signaller, Breakfast Creek, Brisbane. "He had a medal from that event which was sold by his daughter some time after his death." 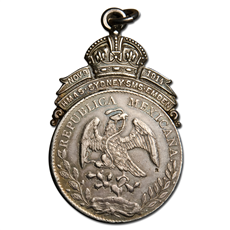 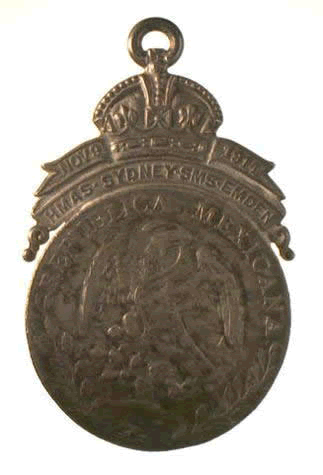 Some information on the Victory Medal

"The contents of the German raider S.M.S. Emden's treasury consisting of Mexican dollars were seized by the HMAS Sydney as prize money. Of the original 6,429 dollars, the Australian Navy Board had 1,000 mounted as medals, 996 distributed to the crew of the Sydney, to admiralty, distinguished persons, libraries, museums, historical societies, etc. both in England and Australia, and the remaining 4,433 melted down at the Sydney Mint and the proceeds of œ1,070 donated to the Royal Australian Navy Relief Fund Those donated to the crew had their service number initials and surname along with rank stamped into the back."

At the Magistrate's Court, Roma, on Thursday, before Mr. A.G. Verry, Acting Police Magistrate, Niels Sorensen, blacksmith, Gunnewin, sued Charles Brady, selector, Qunnewin, for £100 damages for the unlawful publication of defamatory matter of and concerning plaintiff. Plaintiff alleged that on 26th October, 1934, at Gunnewin, defendant unlawfully spoke and published of and concerning plaintiff the defamatory matter complained of. . From the evidence it appeared the parties had conducted the business of blacksmiths in partnership at Gunnewin from 1st February, 1934, until 1st October, 1934, when the partnership was dissolved. Plaintiff alleged that about 11 a.m. on 26th October, defendant came to his camp at Gunnewin and abused him, and as a result plaintiff called over to his camp Archie Wallace Foster, and his son, Robert Wallace Foster, who were camped about 70 yards away, and the words complained of were uttered by defendant in their presence. Plaintiff, Archie Wallace Foster, and Robert Wallace Foster gave evidence in support of plaintiff's case. Defendant denied using the language complained of, and stated that he was not at plaintiff's camp at the time alleged, and the first time that he was at plaintiff's camp on 26th October was later in the day, when he visited the camp in company with George Percival Reid, storekeeper and selector at Gunnewin, who also gave evidence on defendant's behalf. After addresses by counsel, the Police Magistrate found that the words complained of were used; that they were capable of bearing a defamatory meaning; and that they were defamatory, and he awarded the plaintiff £15 damages, £1/12/6 professional costs, 9/- costs of court, and £8/11 witness's expenses, a total of £26/15/6. Mr. J. M. Pack (R. H. Dyball & Pack) appeared for plaintiff, and Mr. F. R. V. Timbury (Mayne & Timbury) for defendant.

and R. H. Robinson) granted the following applications at the sitting

The Victory medal was awarded on December 16, 1935 and has an address of 'Hillside', Gunnewin Via Roma Qld. I have researched the property of 'Hillside' Gunnewin and found that the property no longer exists as a single property but it was about 20 km from Injune on the Roma to Injune road and 69 km from Roma the other way. There are no businesses in Gunnewin that exist today. It is possible the last owner of 'Hillside' was a Mr. Alex Neil who died about 2002. Charles owned or managed a hotel in Wallumbilla. There is also a reference on the Service records of the Victory medal being forwarded to the Hon Sec. E.H. Yates R.S.S.I.L.A. WALLUMBILLA 4428 Qld. (Ref No. 448/201/905 on December 16, 1935). I phoned the local newsagent come General store in Wallumbilla and was told there was no RSL at Wallumbilla or any R.S.S.I.L.A. and found a 'Hillside' did exist but it was not the Gunnewin 'Hillside'. A statement of Service was sent by the Navy to a K Ratry (Rattray) on May 12, 1959 with the reference No. 4036/22/768 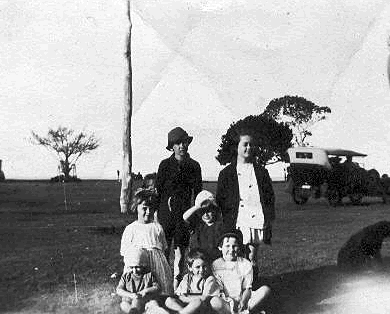 Bill and Zena at 'Hillside' via Roma 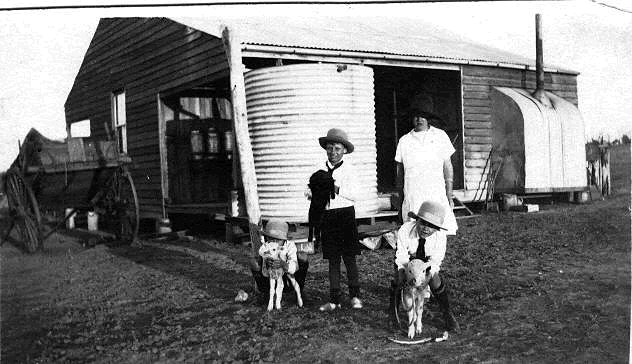 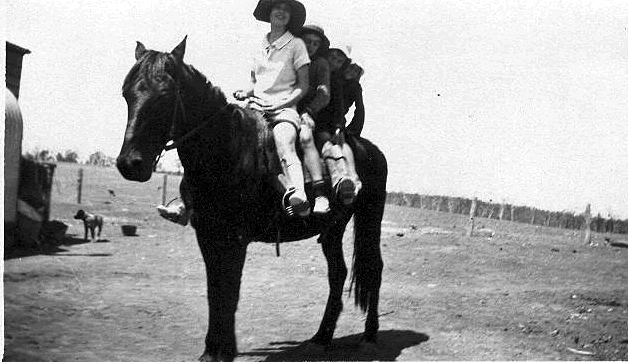 Charles married Alice Beatrice Sidney from the Lagoon Creek, Warwick on the Darling Downs on September 5 1923.

They married according to the rites of the church of England at the Holy Trinity Church in Fortitude Valley and they lived for a time at Gunnewin. They left Gunnewin in 1935 and moved to run a hotel in Wallumbilla (E.R. 1936 Hotel keeper Wallumbilla). It was most likely the Federal Hotel in May Street as that is the only hotel in town and has been in existence for more than 100 years. By 1938 Charles and Alice appear to have split up. The electoral roll indicates that Charles went to Ipswich but he did not enrol there and Alice went to the Maranoa Electorate. Alice registered on the roll on September 15 1937 and lived at Pine Grove, Eumina. In 1941 Alice had changed her name to Giles but was not on the same roll in 1942. We have information that Charles ran a hotel in Ipswich so that much ties in. Charles also ran the Redbrick Hotel in Brisbane at one time. There are records of numerous licence transfers with different hotels in the newspapers of the time.

Charles Henry Brady remarried in 1939. Patricia Mary IRELAND was one of 7 children of Charles John IRELAND and Isabel Marshall EBESTON.

Charles and Patricia had three children.

Mary Patricia Brady (Dargusch) died in 2000. I understand that at an early age (5) she was kicked in the head by a horse.

We were told that his father Charles BRADY and Ellen KING were both deceased when Eva was committed by R.A. Ranking, Police Magistrate, Brisbane for a detention period of 5 years, as a neglected child. She was sent to St Vincent's Orphanage on May 25, 1909. Charles was younger than Eva and he was not ordered to go but may have been a voluntary admission as there is a record of his First Confession and Confirmation. Charles First Confession was with Father Baldwin on August 18 1905. At this time Charles would have been almost 9 but the age was recorded as 7.1 years and Eva 8.7 years.

However, his First Communion was recorded as December 19 1907 with his age at 11.1 years and he was about that age. Ellen Hanscomb remembers that Bertha was at an Orphanage and she had a friend called Lizzy Jane who lived at Sandgate and she would visit Bertha on her days off. Later Lizzy moved to a house next door to Bertha's at Heal Street New Farm. It is possible that Bertha was in the Orphanage at an earlier time but in 1911 she lived at Heal Street, NEW FARM and would have been about 27 years old. Bertha married Ernest Edwin COATES on October 9 1909. Ernest Edwin COATES father was a soft drink manufacturer in Fortitude Valley near Ivy Street. When he was ready to retire he sold the business and left the children to make their own way in life.

Ellen Hanscomb recalls that as a child at Bertha's home three of the Page children visited one day. As Bertha's husband was home they were told to go away.

GAMING CHARGE FAILS.- In a reserved judgment, Mr. W. P. Wilson,P.M., dismissed a charge against Charles Henry Brady, licensed victualler, of the Hotel Victoria, Stanley Street, South Brisbane, of having permitted his premises to be used by Victor Waghorne for betting on January 15.

The History of HMAS Tingira