Charles Brady was the first son of John Brady and Catherine Gallagher and the second born. He was born about 1863. On his daughters Eva's birth Certificate he stated his age as 29 on 13th July 1895 so it is possible he was actually 32.

Charles never married but he did spend some time with Ellen Jane Ford at Beenleigh before moving to Ipswich Road Junction about 1895 for the birth of Eva Brady and then Charles Henry Brady in 1896.

Charles father John Brady was a Cedar timber cutter (felling) . It was said that Charles worked on the Darling Downs as a Drover and was an skilled horseman. Charles loved to tell stories of his adventures and experiences.

The Brady story started in Australia when Peter Brady arrived on the 'Dorothy' on 19 September 1820. According to the 'Brady - Petersen Family History' given to me by Carl Petersen: -

"Peter Brady arrived in the colony on 19th September, 1820 on the 'Dorothy'. He had hazel eyes and brown hair and 5' 9" high with a fair/ruddy complection and had served two years as a mason's apprentice. He was 19 years of age. He came from the County of Cavan, Ireland. He was tried in the summer of 1819 at Louth and sentenced to seven years in the colony. Peter was in further trouble in 1821 when he was sentenced to two years for robbery and sent to jail in Newcastle. He was then granted a certificate of freedom on 20/7/1826. He was described as a stone cutter." "In the 1828 Census, Peter Brady, 25, free by servitude, arrived per "Dorothy" 1820. 7 years sentence. Catholic. Stone Cutter at Alex McLeod, Maitland, Luskintyre".

More about Jane Jones below.

The children of that marriage were: -

The children from that marriage are: -

In the 'Brady - Petersen Family History' it states in relation to Charles Brady: -

"Charles Brady was the second child of John and Kate nee Gallagher, Brady. He was born in 1863. When still a youth, it was said his father John would take him to the Public House and buy him a few drinks, it created much mirth among his father's friends when Charlie had some difficulty walking. Perhaps it is not surprising then that the fully grown Charles was known as a rough slightly wild type of man, typical of this period of the Tweed's history. He worked on the Tweed timber (felling) with his father. He was an excellent horseman and travelled and worked on the Darling Downs as a Drover. He was a great "teller of tales" and would keep the family enthralled with his many experiences.

He is thought not to have married but to have lived with a married lady at Beenleigh for a number of years. She had two daughters to him, and some years later his sister Eva brought his daughter, also named Eva, to the Tweed to live with her, but the youngster considered her Aunt to be too bossy, and did not stay long. She and her sister were brought up as Brady's."

Most of this story fit what we know of the Brady's except it was a girl and a boy and they were born in Brisbane. It may have been that Eva was sent to the Tweed and on her return was sent to St. Vincent's Orphanage as a neglected child.

About 1895 Ellen Jane Ford and Charles Brady, together with her daughter's Birtha King and Mary Ford, moved from the Tweed Heads area or Beenleigh to Brisbane's Broadmere Estate at Ipswich Road Junction, Annerley. On Ellen's Death Certificate it states that she was in Queensland for 13 and New South Wales for 29 of her 42 years.

Eva BRADY was born July 13 1895 and Charles Henry Brady was born 26 September 1896 at the Broadmere Estate at Ipswich Road Junction Annerley Brisbane. Ellen Jane FORD was the mother and the father was Charles BRADY a Drover from Tweed Heads. 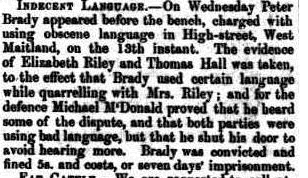 On Wednesday Peter Brady appeared before the bench, charged with using obscene language in High-street, West Maitland, on the 13th instant. The evidence of Elizabeth Riley and Thomas Hall was taken, to the effect that Brady used certain language while quarrelling with Mrs. Riley; and for the defence Michael M'Donald proved that he heard some of the dispute, and that both parties were using bad language, but that he shut his door to avoid hearing more. Brady was convicted and fined 5s. and costs, or seven days' imprisonment.

"The New South Wales Government Gazette contains a notification that a lease of about 1280 acres of land, situated on the Tweed River, county of Rous, parish of Berwick and Teranora, has been granted to Mr. Charles Brady, for silk culture, from 1st of January, 1873, to 31st of December, 1877, on condition of the annual payment of rent, by way of acknowledgement, one shilling." 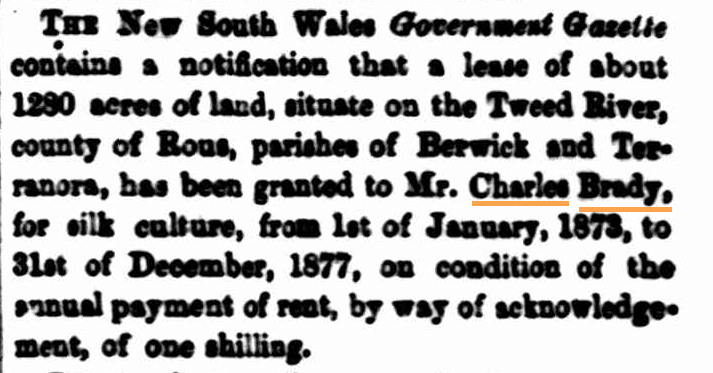 Charles Brady, a drover, was ordered to pay 8s. per week for the support of his two children, together with £2 2s. professional costs. 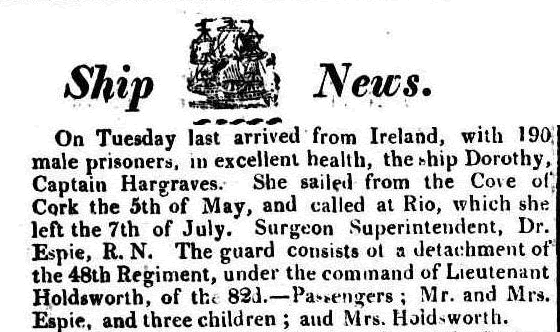 "On Tuesday last arrived from Ireland, with 190 male prisoners, in excellent health, the ship Dorothy, Captain Hargraves. She sailed from the Cove of Cork the 5th of May, and called at Rio, which she left the 7th of July. Surgeon Superintendent, Dr. Espie, R. N. The guard consists of a detachment of the 48th Regiment, under the command of Lieutenant Holdsworth, of the 82d. 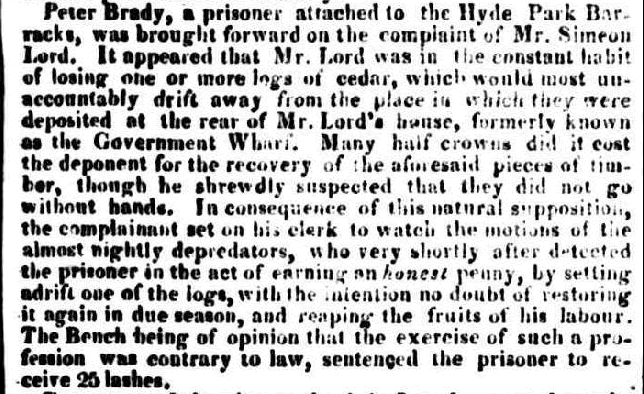 "Peter Brady, a prisoner attached to the Hyde Park Barracks, was brought forward on the complaint of Mr. Simeon Lord. It appeared that Mr. Lord was in the constant habit of losing one or more log's of cedar, which would most un accountably drift away from the place in which they were deposited at the rear of Mr. Lord's house, formerly known as the Government Wharf. Many half crowns did it cost the deponent for the recovery of the aforesaid pieces of timber, though he shrewdly suspected that they did not go without hands. In consequence of this natural supposition, the complainant set on his clerk to watch the motions of the almost nightly depredators, who very shortly after detected the prisoner in the act of earning an honest penny, by setting adrift one of the logs, with the intention no doubt of restoring it again in due season, and reaping the fruits of his labour. The Bench being of opinion that the exercise of such a profession was contrary to law, sentenced the prisoner to receive 25 lashes."

Isabella Hope - daughter of Lord and Lady Hope - ran away to Australia with groom in 1807. He (Mr. Brown) died on ship to Australia - 3 months in Aust Isabelle married John Jones in 1808 and they had Jane in 1810. He died and she married William Smith in 1812, a convict, and went on and had 10 children. William became a very wealthy man after his certificate of freedom and he acquired 50 acres of land at Pennant Hills and had fruit orchards. Sent as convict for highway robbery for life. Ironic William worked his way into a job as clerk in Gov Office and himself held up by a bushranger. He was the district Constable and pound keeper. When he died he had amassed a large sum of money 1,000 pounds in 1865. 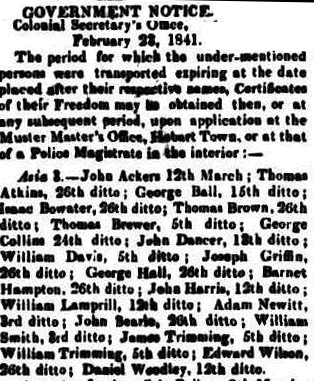