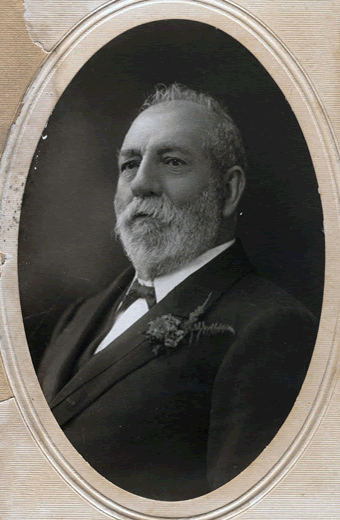 George Prout was my Great Great Grandfather. The following account of the life and times of Mining Captain George Prout was published in "Adelaide and Vicinity" before the death of George.

I was lucky enough to buy a copy of this book.

"Born at Camborne, Cornwall, on June 10, 1839. Mr. George Prout has like so many of his countrymen, for years been a mining man of influence in Australia. The county in the south-western corner of England is the cradle of successful miners and restless colonists who have scattered themselves over the globe, and, with the "cross-grained friend" called experience, and hereditary instinct, delved in every clime, or become good husbandmen. The comprehensive development of Australian mining fields is largely due to their knowledge and thoroughness and enterprise.

Mr. George Prout, better known as Captain Prout, came to South Australia with his parents in the ship Lady Bruce, in September, 1846." (Actually 11 September 1846) "After working for a few months, in 1847, in Foster's Brickfield, he became an ore-dresser at Peach's Mine, Glen Osmond, the ruins of which can still be discerned by the curious. At the beginning of 1849 he proceeded to the Burra, where he worked at the great copper mine there until the early part of 1852. He then returned to his home at Kensington Park, then known as Little Cornwall. Whence he went with his father, the late Mr. George Prout, to the Enchunga gold rush. This field did not afford much scope: and the father, who had previously been to the Victorian diggings, returned thither, taking his son with him. The pair started from Melbourne with a team conveying tools and provisions, and took the Forest Creek track. When passing through Black Forest, heavy rains caused them to abandon the team, and to tramp to Forrest Creek through mud and slush often up to their knees. They did not recover their possessions until three or four weeks later, when they were brought in by teamsters. Although a mere boy at the time, Mr. Prout entered very thoroughly into the work and spirit of the diggers, and while growing in stature, gained a splendid experience. In the same year (1852), the first Wesleyan Chapel was built on the goldfields-at Forest Creek-and Mr. Prout was one of the first boys to attend the school attached to it. He was for some time engaged at Preshaw's Flat, between Castlemaine and Campbell's Creek, with his residence at the latter place. He remembers seeing, at this place, 50 lbs. weight of gold taken from a bucket of wash dirt obtained at a depth of 25 feet. In November, 1852, Mr.Prout temporarily left the fields for South Australia, returning to Victoria in a little while with his mother, brother, and sister.

Although passengers by the fastest boat then on the coast, they were 14 days accomplishing the distance between Adelaide and Melbourne. The passage was stormy, and it was sometimes feared that the vessel would sink. In the eastern capital the family were met by Mr. Geo. Prout, sen., who had purchased a horse and dray and a large tent for £45. After a six days' journey the family arrived at Campbell's Creek. At the Seventy-feet Hill rush, the rope by which the lad was descending his father's claim-- 80 ft. deep--snapped. and he fell a distance of 75 feet, breaking his ankle and splitting his leg upwards for 10 inches. This claim proved rich, containing some five or six feet of wash dirt. In 1854, after spending his Christmas in bed, owing to his accident, young Prout went to the Tarrangower (Maldon) rush on crutches; but not being successful there, he went on to Avoca. He had by this time discarded one crutch, and, although still somewhat impeded, was able to help his father, and to do well himself on the latter field. The first load of wash dirt they obtained, at the bottom of a shallow hole, went 13 ozs. of gold. From Avoca the pair journeyed to Mount Mologa, Sandy Creek, Adelaide Lead, Back Creek, and Dairy Hill. Between the two last places (now called Talbot and Amherst) the father bought some land in 1854. The son, as with other diggers, went from field to field, being successful in some and not in others. From Dairy Hill he removed to Fiery Creek (Beaufort), Glenpatrick, Pleasant Creek, St. Arnaud's, Fiddler's Creek, and Scandinavian Crescent at Hack Creek. He remained at the last place: from 1856 to 1863, and lost most of his accumulated money in speculating. As a consequence he had again to assume nomadic habits. He proceeded to Chinaman's Flat, thence to Clunes and Ballarat. In 1866 he returned to Talbot, and selected land on the Bet Bet Creek, near Woodstock Station, where for eight years he engaged in mining and farming; but with small rewards. He became a member of the Lilliam School Board, and opened a Sunday-school, known as the United Sunday-school, for all denominations.

In 1874 he sold his land, came back to South Australia, and carried on business for five years in Adelaide as a rough carpenter. He next became agent for the Australian Widows' Fund Life Assurance Society, and canvassed through the Far North for 12 months with a good deal of success. Tiring of this life, however, he returned to his proper calling, mining, and was engaged to report on reef country at Mount Brown, New South Wales. After completing this work in 1881, he became manager of the South Australian, Prospecting Association, on behalf of which he prospected through the Far North. It was his intention to go through the Barrier country, but he was compelled to turn back owing to a severe drought. He worked at Echunga until the latter part of 1882, when he went to North Queensland to report on the Union Mine, Mount Davenport, which he pronounced to be worthless. In company with three other gentlemen, he travelled through Charters Towers and Ravenswood, and recommended an outlay in proving Kirker's Reef. He took charge of this claim in I883. While here he was gazetted a Justice of the Peace, and he held that position until he left Queensland in 1886. He had for years been trying to mature a process of dry gold amalgamation by the vapors of mercury, and he now introduced the process to some gentlemen in Sydney. They were favorably impressed with the principal, and, with Mr. Prout's assistance, they erected a plant on his plant at Mr. John Sand's Dockyard, Pyrmont. After three months it proved a success. Mr. Prout was congratulated on all sides as having laid the foundations of a fortune. He only lived in the state of bliss for four days, when it was discovered that the principal had been patented by Drs. Foster & Feisman in America eight years before.

After this disappointment, Mr. Prout returned to Adelaide, and for four years carried on mining in manganese, between Eurelia and Edeowie, sending thousands of tons of mineral to England. Being of an inventive turn of mind, in 1889 Captain Prout went to England to secure patent rights all over the manufacturing world for a system of welding copper to iron for ship-building purposes. Before securing the patent, a search was made of the records over the preceding period of 40 years to see if the process had been forestalled: and as no previous registration was found, Captain Prout took out the patent rights for every country but America, for which latter he was kept waiting for two years. A syndicate had in the meantime been formed to purchase the process after a successful trial had been made. This was carried out at Birmingham with great success. It was arranged that as soon as the Captain secured the American patent rights the syndicate was to give him ₤10,000 and 40,000 fully-paid-up shares in a company of 200,000 shares. But he was again doomed to disappointment, for, after much circumlocution, it was learnt that the discovery had been patented 65 years before.

Captain Prout was not without honor in the old country. His qualities as a mining expert were approved, and he was engaged to report on various properties. He was sent to Sicily to inspect silver-lead mines, which he pronounced suitable: to North Wales to examine gold reefs, which he found unpayable; and to South Wales to report on a recent silver-lead discovery. He recommended that a company should be floated to work the last, before doing which those interested called upon Captain Thomas,of the Dalcouth Mine, for a report. This authority confirmed Captain Prout's opinion, and a company was formed; and the mine has now been working for some years. Captain Prout was also asked to report on the caustic soda smelting process at Newcastle-on-Tyne. His report was favorable, and he was given sufficient interest to become a director of the company. Upon retirement of one of the directors, the Governor of the Bank of England, chairman of the Board, nominated Captain Prout to the vacancy, which he filled till he left England for South Australia once more in 1892. Late in that year he was sent to Western Australia to report on mining property at Coolgardie. He made the voyage and journey in company with Mr. S.W. Pearce and his son, William Pearce. Later on, he was the second expert to report favorably on the great Boulder group of mines. Like so many immensely wealthy properties, these mines were at first reported on adversely by many of the experts, and the subsequently-proved correctness of his report is a tribute to Captain Prout's knowledge. It is also a tribute to the mining acumen of Cornishmen to record that the only other favorable opinion given by experts up to this time on the Boulder Mine was that of Captain Oates, of Southern Cross, also a Cornishmen and an experienced Australian miner. Captain Prout spent five or six days in thoroughly examining the whole of the claims in the Kalgoorlie locality, and was impressed with them that he wired to Adelaide for as many shares in the syndicate as could be obtained. His agent, however, took no action, because so many bad reports about these properties were being published every day.

Captain Prout then returned to Adelaide for a few months, with Mr. S.W. Pearce, one of the discoverers of the Boulder Group, on behalf of a syndicate, he made a prospecting tour in the Dundas district, and discovered the Lady Mary and other properties, which were afterwards floated into companies. He had charge of the Lady Mary for two years, and was first Chairman of the progress Committee on the Norseman. He assisted in building the first Methodist Church on the Dundas fields (Which was opened free of debt) and was one of the speakers at the opening ceremony. He left the West in October, 1896, for Adelaide. In 1897 he proceeded to England to patent an ore-crushing machine: but, owing to certain proceedings in Adelaide, had to relinquish the idea. He has since resided in Adelaide, and passes his time in watching over his mining interests, and as an investor." 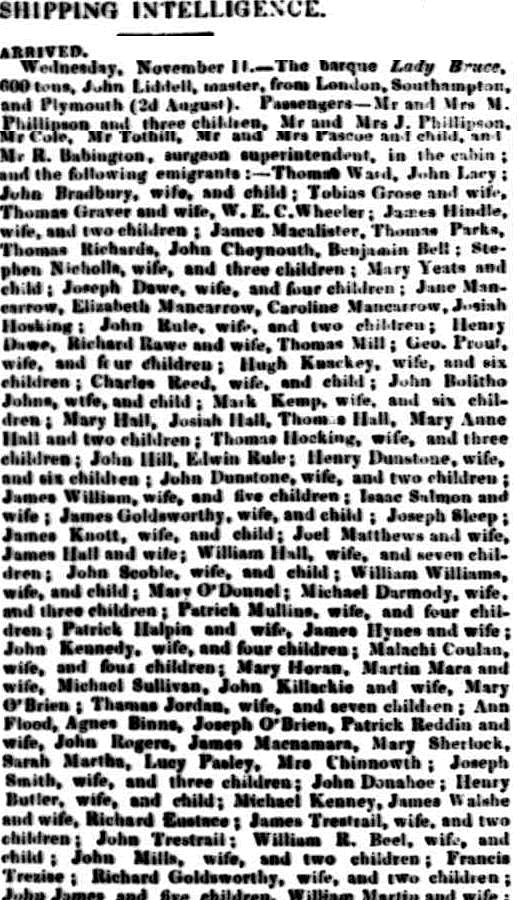 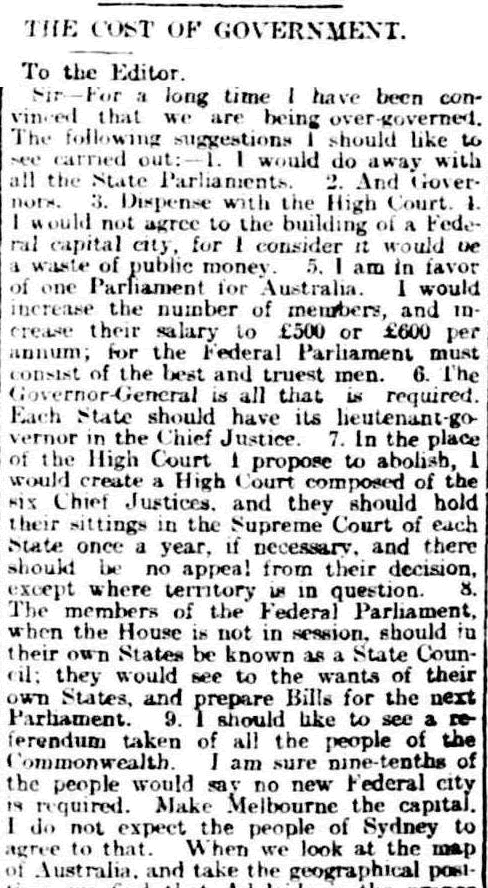 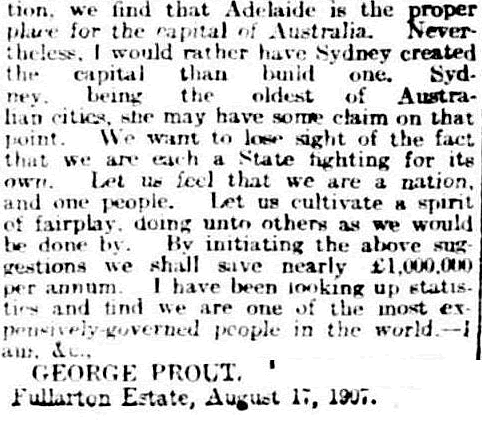 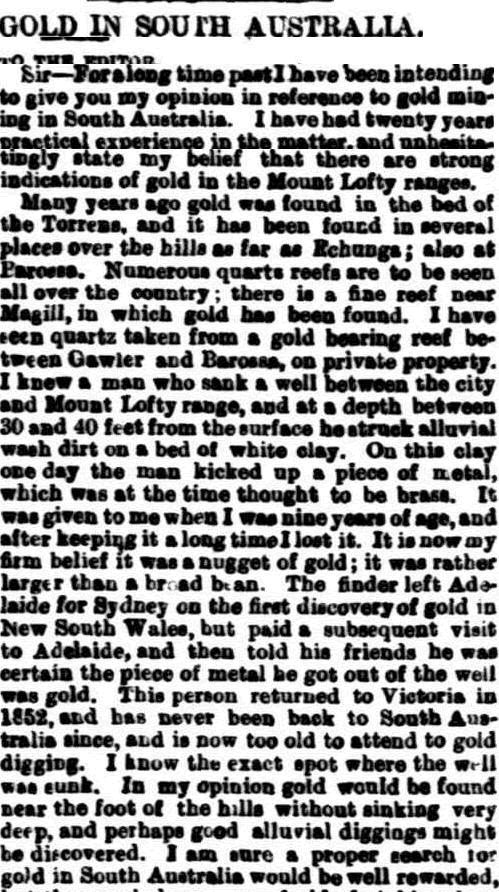 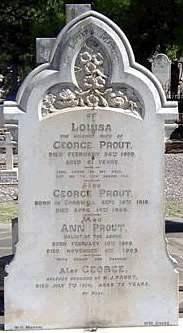